I remember the good old days of waking up as a kid to get ready for school, sitting down on the extra-plush many brown-toned couch with a TV tray, my bowl of Cookie Crisp, a cup of Lipton Tea, and I had a good forty minutes of cartoons to enjoy before the hell that is other children pushed me further to question humanity.  When I was very young, Starblazers ruled the day as did episodes of Tom and Jerry

and to a lesser extent Felix the Cat

.  When we moved to Santa Barbara, there was Voltron

(Lion and Spaceship versions), Battle of the Planets

, Mazinger Z and if I was not lucky, Jonny Quest

Don't get me wrong, Jonny Quest was okay, I liked Race Bannon the bodyguard, who for some reason reminded me of my grandfather.  Dr. Quest was cool as the brains behind the outfit, and the white bulldog, Bandit, was cool because he was a dog...I always loved dogs.  The kids, Jonny Quest and his boyhood companion Hadji, kind of bugged me.  They were always getting into trouble for doing something they should not have been doing, but they had cool people to help them out and a cool dog.  As a kid, I'm sure I would have been a much better boy adventurer and I definitely would have appreciated dealing with treasures, super-science, mummies and frog-men much more than those two brats ever did.  It should have been me goddammit.

Fast forward about 25 years later, and I still watch and love cartoons, but today I am enjoying The Justice League

and scores of Anime.  There is one cartoon series from The Cartoon Network's Adult Swim imprint that I would be happy to watch everyday for the rest of my life...The Venture Bros.

I came across The Venture Bros. during a bout of channel surfing a few years ago, when we used to shell out shitloads of cash for the all-but-worthless cable, and I fell instantly in love with the show.  It cracked me up beyond any cartoon that I had ever seen and there were points where I actually started crying and wheezing because I was laughing so hard.  I was hooked. 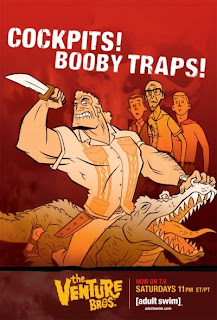 The Venture Bros is a loosely based spoof of Jonny Quest, with the main cast of characters consisting of:
Hank Venture - The more emotionally developed of the two brothers Venture, who dresses all too similarly to Fred from Scooby Doo.  He is always ready for adventure, but tends to not think things through.

Dean Venture - The overly cautious other Venture brother, who is even more trapped in the 70's than Hank, and surprisingly out of touch with reality to the mystification of those that meet him.  Other youths find him to be very weird. 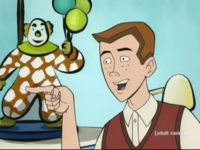 Dr. Thaddeus "Rusty" Venture - Father of Hank and Dean, and a failed super-scientist who is addicted to diet pills and forever living in the shadow of his deceased father.  Always well intentioned, his methods leave a lot to be desired. 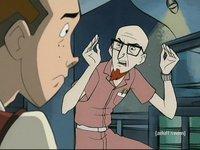 Brock Samson - The Venture family's very own highly-volatile body guard.  Possessing extensive training in killing  and hurting people, no one is safer than when Brock is protecting them.  All of the Venture family's archenemies quake in fear when they see him, but he does have a gentler side and at times it seems that Brock loves the boys more than their actual father.

The Monarch - A scrawny, angry man in a butterfly costume that really has it in for the Venture family and with his army of butterfly dressed henchmen, he is always plotting their defeat, and rather obsessive about achieving his goals.  Now, if only Rusty actually knew or cared who The Monarch was...

Dr. Girlfriend - The beautiful and very deep-voiced lady(?) love of The Monarch.  She is his right hand man(again with the ???), and is definitely the brains of their operation.  Her excessive curves garner much attention, but the incredibly deep baritone voice leaves those who meet her with...questions. 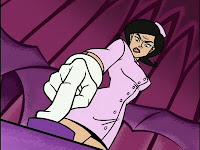 The Venture Brothers also has a whole slew of supporting characters that continues to grow with each episode, most of whom are completely bizarre and simply hilarious; the season two finale even pretended to star David Bowie as leader of a secret organization, and Iggy Pop and Klaus Nomi as super assassins.  Jokes and pop culture references abound mix with the ever witty banter and the deep character development.  It is clear that the creators of this brilliant show truly love what they are doing, which is part of the appeal to the rabid fanbase--me included.  I cannot wait for August to roll around so that season four can finally finish up, and then I will be feverishly biting my nails in anticipation of the blu-ray release.  Buy it.  Buy it.  Buy it.

*One thing to keep in mind, is that if you are easily offended due to pokes at religion, occasional nudity and cursing, then this show is not for you.  But, if that is the case, then what the fuck is a nutsy bible thumper like you doing reading my goddamn blog?  I was naked when I wrote this.