The Ultimates by Mark Millar (W) and Bryan Hitch (A)

For the umpteenth time, I have finished rereading Marvel Comics's The Ultimates

) with incredible art by Bryan Hitch (The Authority, Fantastic Four

Marvel created the Ultimate Marvel imprint line of books as a re-imagining of the current Marvel universe, beginning with Ultimate Spiderman

by Brian Michael Bendis with art by Mark Bagley, which spanned 130+ issues and has been said to be a consistently great comic book...unfortunately, I have not yet read it, since it is a bit much for me to dive into at this point. There was also an Ultimate X-Men

book of which I read the first two TPB's, Ultimate Fantastic Four

neither of which I ever read.

The Ultimates, however, I did read and hungrily anticipated the release of each comic as it was released, or rather delayed for eons between each issue, but more on that later.  The Ultimates is a re-vamp of The Avengers team book with some fairly crazy character tweaks and a more up-to-date real world setting, including the use of President "W" Bush speaking with the team at various points.  The Ultimates is comprised of:

The Ultimate-verse Captain America was indeed frozen in a block of ice after World War II, but in this series he was essentially thawed out around 2002 and is very much a man displaced in time; to him, yesterday was a period of Coca Cola bottles, manners, and more modestly dressed citizens.  He is also much more of a hard-assed tough guy from his extensive military training and backs down from no one.  He is not one to be messed with, even by those with immense powers. 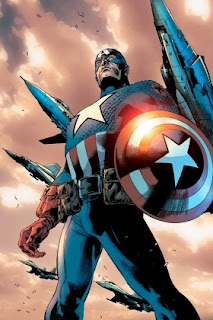 Iron Man, aka Tony Stark, is much the same as he has been represented in the past, although his suit is now based a bit more in the real world and requires massive amounts of power and a full tech crew to get him up and running.   Tony also has a terrible secret that has spurred him to use the vast monetary resources available to him to change the world for the better.  Much of The Ultimates book influenced the first Iron Man

movie, which is very apparent in the depiction of... 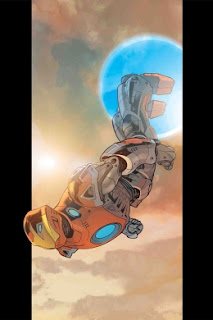 Nick Fury, the man who runs S.H.I.E.L.D. and also leads the team, is no longer the eye-patched white super spy from the 60's, but now bears a striking resemblance to Samuel Jackson, which the character openly jokes about at various points throughout the book.  Otherwise, he is fairly similar to the regular Marvel Universe character with the intrigue, partial truths and borderline deception. 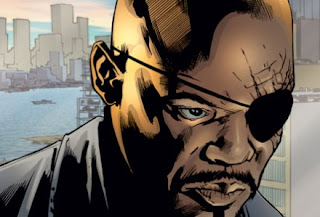 Jan and Hank Pym are the scientific couple known as the Wasp and Giant Man.  To the team, they seem to be fun loving and the happiest of couples, but that is during the good times.  When the bad times come, a completely different side of the couple surfaces that no one expected, one which Captain America will not sit back and allow to go unaccounted for. 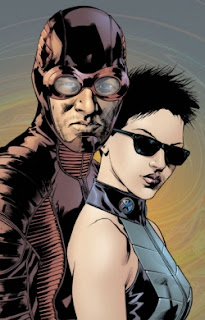 Then there is Thor, my favorite re-imagined character of the bunch.  This version of the Norse god, had him committed to an insane asylum for a period of time, but now the incredibly tall, muscular, yet not bulky man has come to grips with the fact that he is indeed the God of Thunder and he will fix the earth either through his vast powers or the staged protests that he organizes around the world.  He seeks to help the environment, stop attrocities from occuring and fights against US right-wing agendas; oil anyone. 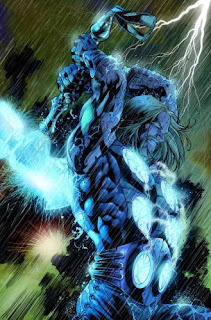 The Ultimates black operations team is comprised of the not so popular and much too close and intimate siblings, Quicksilver and the Scarlet Witch, who none of the members like.  They are joined by the Black Widow and Hawkeye.  The first three are fairly similar to their regular Marvel Universe versions--with the exception of the creepy brother and sister dynamic--but Hawkeye is much different in that he is now an expert killer with no qualms about following the most lethal of assignments; he does not wear an overly silly outfit. 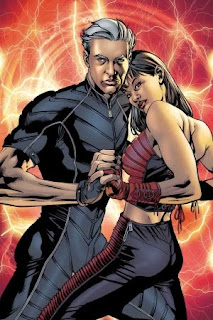 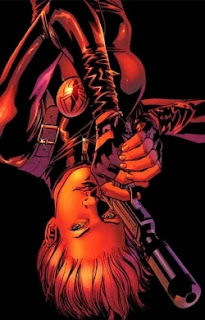 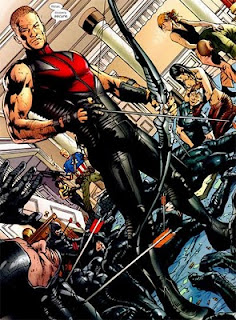 Finally, and the main antagonist of the first story arc, is Dr. Bruce Banner, The Hulk.  Banner is invited to the team to redevelop the super soldier serum that gave Captain America his powers, but was long thought lost with the supposedly dead hero.  Before the Cap is found in a block of ice, and very much alive and well, Dr. Banner injects himself with his version of the serum and turns into the Hulk before embarking on a mindlessly murderous rampage.  Barely being defeated, Nick Fury puts together the Ulitmates as a deterrant to superhuman threats and Banner struggles to keep the Hulk, who is now very much a part of him, at bay.  He does not succeed for long. 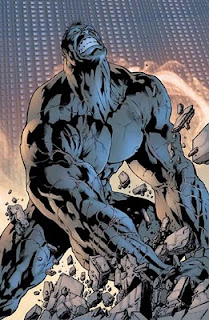 is a highly addictive and engaging read with beautiful artwork from Hitch that continues to sing the praises of his work from The Authority.  The dialog reflects the early 2000's political environment perfectly and the state of the world at that time is accurately shown.  Each character is given their moment to shine or appall, and when moments seem most dire, Millar brilliantly introduces an unexpected twist that leaves the reader hungry for more.

I collected the individual comics and was left eagerly awaiting the next issue, which was the main problem with the series; I was forced to wait through very long delays.  For the final issue of Ultimates 2, there was about a year and a half delay, but in the end it was all worth the wait...especially now that we have them collected in TPB form.  Thankfully, now that Millar and Hitch's run has finished and been compiled, the books are available to read in one very long sitting, which I strongly suggest that fans of intense superhero comics should do.  Another of my all-time favorite books.

The Ultimates by Mark Millar (W) and Bryan Hitch (A)