Sidekicks That Should Have Been Kicked to the Side

Writing about my current favorite animated show The Venture Brothers

yesterday got me to thinking about all the old time cartoons that I used to love.  There were so many shows that my brother and I watched religiously that it is almost too numerous to keep track of, but there was always a common element that used to piss me off to no end...the sidekick.

Why did so many cartoons of the seventies and eighties include at least one utterly worthless character that filled everyone's lives with even more peril than was already present?  Take for instance Orko from He-Man and the Masters of the Universe

.  What did this character ever do to further the plot, short of getting captured, failing catastrophically at some sort of magic trick and detracting the heroes of Eternia from defeating the evil terrorist, Skeletor, once and for all.  Confused little Donist that I was would sit on the couch in utter bewilderment, wondering why they did not just lock the guy in prison until Skeletor, Beastman, MerMan and the ever scrumptious Evil-Lyn (who one could only hope could be reformed from her oh-so-bad girl ways) had been defeated.  I wanted to see conflict and loss, hope and despair and the overcoming of extraordinary odds, but instead we got Orko falling into a well, or accidentally teleporting Teela (another hottie) into Beastman's grip (Ewww gross). 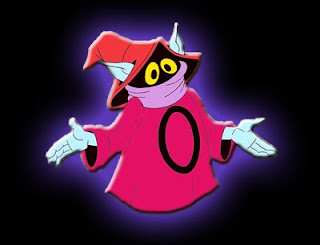 "Awwww...shucks guys.  I don't suck that bad."
He-Man was not the only offender in the use of the sidekick as comedic relief--there was also the Thundercats

' Snarf.  This rollypolly life-wrecking menace was a cross between an alligator and a cat, who consistently screwed things up in the day to day battles between the Thundercats and the evil Mumm-Ra.  Nearly every week, it was like, "Don't pull that lever Snarf, we don't know what might...Snarf...why did you pull the lever?  It clearly said 'pull for evil'."  Lion-O, Panthro, Tigra, and the delicious Cheetara may as well have put themselves on the endangered species list by allowing that little snot to consistently put their lives into jeopardy.  Even the kidtens (get it?  Kids...Kittens?  Forget it), Wilykit and Wilykat, could handle themselves and could actually whup some ass when needed, but Snarf...not so much. 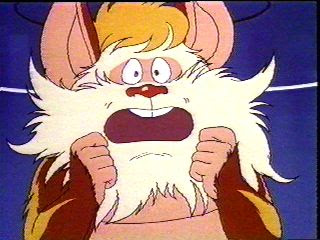 "This is my reaction to everything.  Snarf...snarf."
Of course this is only the beginning of a long list of annoying sidekicks, who were meant to provide comic relief for the kids who could not handle too much realism or suspense.  Total nonsense.  If a child cannot handle the scary Skeletor or the horrific Mumm-Ra, then their parents should have had them stick to The Monchichis, The Smurfs, The Snorks or The damn Carebears.  I know, I know, demographics, target audiences, toy merchandising and syndication are the reasons behind trying to pull as many viewers in as possible, but as a twelve year old, I was insulted.

Just because I was a child did not mean that I was incapable of handling intense well told stories, in fact quite the opposite.  The Snarfs and Orkos could have been downplayed and still utilized within the story, but not to the point of nearly taking on the roll of the protagonist.  If they were removed all together, I still would have bought just as many toys, if not more.

What I really found myself enjoying the most was Robotech.  Characters were well developed, I cared about them and occasionally they even died in the line of duty, which was heart-wrenching.  There was love, loss, and an overpowering sense of impending doom.  It was intense and engaging and made no attempt to capture every possible age group...the only thing working against the show was that the other cartoons had cooler looking action figures.

Some other shows that could have done without their sidekicks:
1) The Fantastic Four - Herbie the Robot.  They chose to replace the Human Torch with a goofy robot?  Wow.  Holy calamity, scream insanity.
2) Superfriends

- Gleek.  Hmmm, a purple monkey that does not do anything except hangout with the dude who can turn into water and a groovy girl that can turn into a dinosaur.  Ditch the monkey. 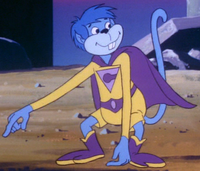 - Trobbits...all of the little bastards.  A ripoff of the idea of hobbits to such an extent that the creators even rhymed their bothersome troublemakers after them.
4) Dungeons and Dragons

- Uni the Unicorn.  This one could have been a cool idea and actually had some redeeming value in possibly two or three episodes of the entire run.  Otherwise, dog food.
5) He-Man and the Masters of the Universe

- Cringer.  Not only did He-Man have Orko, the creators thought that they did not go far enough and decided to have two characters for comic relief, thus Cringer the cowardly green tiger. 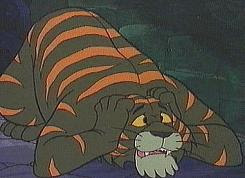 "Why does Donist hate my ass so much?  I turn into Battle Cat...*sniffle"
6) She-Ra: Princess of Power

- Madame Razz, Broom, Imp and Kowl.  A female witchy version of Orko, a talking broom, a purple little demon, and the spawn of Gizmo the Gremlin and Woodsy the Owl, respectively.  Where He-Man had two sidekicks, She-Ra had at least four.  Damn. 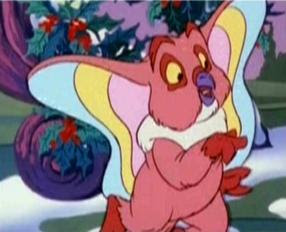 I just don't know what to say.
7) Godzilla

- Godzooky.  For the love of god, why?  I loved the live-action campy Japanese Godzilla, and this is what America comes up with for a cartoon.  Oh the humanity. 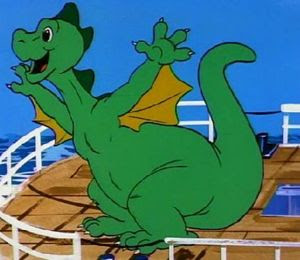 You have got to be shitting me.  This is the son of Godzilla!?
I am sure there are a ton of others out there, but I think you get the point--I'm also starting to get angry, just like I did when I was a kid.  Now that I am an adult, if it were up to me, I would...I would...well...probably have a crossover that starred Cheetara, Evil-Lyn, Wonder Woman and She-Ra, and it would be very hot outside and they would have to put aside their differences to go for a swim in the nice, quiet and very private lake...ummm, this is a separate topic all together.

Sidekicks That Should Have Been Kicked to the Side