This past Sunday, Donist, The Brother of the Donist and The Friend of the Donist went to Los Angeles to attend the opera Siegfried.  Normally, I consider being cultured adding tabasco sauce to the ranch dressing that I dip my french fries into, but not Sunday; Sunday was mad culture.

We left Santa Barbara at 9:00 AM for the drive down to LA, which went smoothly enough with no traffic headaches and we even had enough time to stop for a bagel before continuing our journey.  It was pretty damn hot in the car, but luckily the drive went quick and it gave us all an opportunity to catch up with one another.  We arrived with plenty of time to spare and were able to hang around outside for a while and talk about the Beatles/David Lee Roth mashup on youtube and various other topics devoid of culture, but soon enough it was noon and Siegfried was on bitches.

The Dorothy Chandler Pavilion is a beautiful theatre with great sound and acoustics, and blissfully roomy seating that did not require me to stand every time someone walked by.  Seating space for Siegfried is very important given that this third installment in The Ring Cycle finished at roughly 5:30 PM.  That is correct.  Five and a half hours of operatic culture for your ass and I do mean ass, because it is going to be a good month before the feeling in your ass returns.  Thankfully, there was a 45 minute break after the very long first act and a 25 minute break after the praise-be-given shorter second act.  After the third and final act, which was also so long that my culture meter was set to burst, was an hour and a half car ride home. 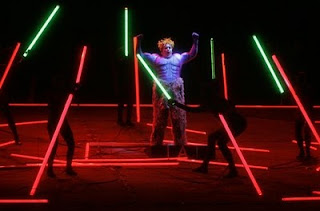 Come to me, my young Jedi
It might be difficult to tell, but The Donist doesn't know dick about opera, and my levels of appreciation may not be up to par with the rest of my upper-crust tabasco and ranch eating brethren, but even I could notice that the performance was visually stunning, as was the lovely orchestral music and the powerful singing...all four-plus hours of it.  If I had to describe this rendition of Siegfried, I would describe it as Xanadu

with light sabers and set to opera music.  The stage was at a 45 degree incline with a circular disc in the center that could be rotated around and the various multicolored light saber tracks were rigged to move, change colors and be picked up and carried around for very striking effects.  Giant eyeballs were affixed to the ceiling, random objects came from the sky and from beneath the stage and again, it was all visually striking for four plus hours. 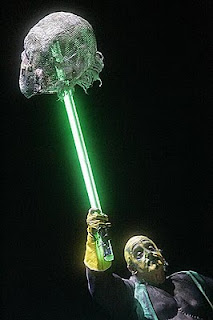 Take my head...please
I don't know what Wagner was thinking on taking so long to tell this story, but Return of the King

had way more going on in its story, and even the extended version was not as long as Siegfried.  Here is the story of Siegfried:  One young beefy and brash young boy misses the mommy and daddy he never knew and has teenage rebellion issues with his adopted daddy the dwarf, Mime.  Siegfried wears wolf footy-pajamas, and thinks killing a dragon will teach him fear.  Mime, wants Siegfried to kill the dragon to get him the one ring to rule them all, and bets his head with Wotan--a god; bad move Mime.  Siegfried kills the cute little dragon, but still does not know fear and kills Mime, because he sent his ass to get killed by the dragon (he knows this because he wears a magic hat after killing the dragon).  Siegfried then finds out that there is a hot Valkyrie chick in a rock surrounded by a ring of fire that is not the one that Johnny Cash sang about.  Siegfried falls in love with the as yet unseen Brunnhilde, defeats Wotan and his glowy spear that I want for my home, and frees Brunnhilde.  From here there is a bit of back and forth and Brunnhilde eventually gets in the sack with Siegfried.  Boom.  Done. 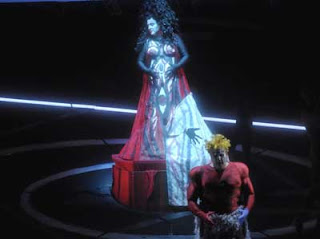 One thing that I learned from watching Siegfried is that the audience needs to not be douchy and have their cell phone randomly go off with video news coverage discussing Colonel Sanders and liberals, and then take approximately two minutes to tear the back off of the phone and yank the battery from it; jerk.  Overall, I was glad I went and that I was able to spend some time with my brother and my friend, and I am glad to count Siegfried as my first, and possibly only, opera.  A 9:00 AM to 7:00 PM trip, with a $107 ticket, and a revolting sandwich at one of the intermissions later and I am happy that we did it.  Off to work and to eat some soup with my fork and dip some fried picklechips into some ranch dressing with a swirl of tabasco.