from Villard Publishing, written by Mike Raicht and Brian Smith and illustrated by Charles Wilson III.  The original two comics in this series came and went from the comic store so quickly, that I did not even known that they had been released. Thankfully, and also unknown to me, the series had been combined into one oddly shaped graphic novel that I came across at Borders last week and after a brief flip through, I knew that I could not hold off buying this book.

The Stuff of Legend

and part hero's quest.  It opens with the Boogieman abducting a young boy, reaching dark tendrils from out of the closet to whip the boy's basset hound puppy, Scout, across the room and doing the same with the boy's teddy bear, Max.  Seeing the boy abducted, a motley assembly of toys gathers to get him back from The Dark.  A group is chosen consisting of: The Colonel - a World War I toy soldier, Princess - an Indian Princess, Max - the teddy bear, Harmony - a ballerina, Percy - the fearful piggy-bank, Quackers - a wooden duck, Jester - a Jack-in-the-box (my favorite), and the only living member of the war party the puppy, Scout.  The moment the group crosses into the dark, they transform into more realistic--and more deadly--versions of themselves, with knives, rifles, hatchets, claws and teeth poised to rend and kill the Boogieman's armies of fallen and lost toys.  The team must also deal with issues of mistrust between the various toys and the puppy that savaged a few of the entourage prior to the boy's abduction, the possibility of a traitor in their midst, and the death of one of their own. 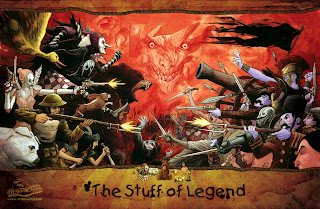 The writing on this book is fantastic and each character is fully developed and unique, having their own set of skills and flaws, and I was cheering for each character throughout the entire book.  I smiled when Max came to terms with the puppy, and I sympathized with Jester's concern for the well-being of his friends after he had been imprisoned by the corrupt Mayor of Hopscotch, the deadly and rigged city built upon a board game.  I felt Percy's fear of injury as a result of the reality of him being a piggy bank to one day be broken open in the real world and I cheered the once faceless toy Princess, who is now beautiful and quite lethal.  This book is brilliant and one that I wish that I had written, but a huge component of this book is the truly beautiful imagery created by Charles Wilson III.  I cannot believe that both a teddy bear and an actual bear (wearing a neck-tie of course) can be drawn in such a way as to actually convey a sense of emotion for the reader.  Backgrounds are oftentimes very detailed and filled with action, yet not too crammed as to become too confusing and overwhelming the viewer.  The book is gorgeous and I cannot wait for the follow up issues for volume two that are set to release bi-monthly starting July 2010...I will probably also buy the series again in tpb form when it releases next year.

The Stuff of Legend

is listed as written for years eight and up, but can be fairly scary at times with the threat of the Boogieman living in the darkened closet and the death of one of the main characters.  I would have loved this book when I was a child just as I love this book now as an adult.  Art and story are married so well that there is nothing negative I can really say about this book, short of having to wait for the next installment and a hope to see more of Harmony the ballerina.  I hope to someday see the creators' names on other projects, just so long as it does not mean that we loose future issues of this wonderful comic. I cannot recommend this book highly enough.