Lots of food, lots of beer, Iron Man 2 and almost no sleep part 2

Iron Man 2 itself was very entertaining.  With a great cast and intense action and visuals, I was  transfixed through the entire movie; I am positive it was not the beer talking.  Stuff blowed up real good and action sequences flowed very well, never becoming the whirling mess of metal that was the Transformers

.  In particular, the Monaco race track scene was visually stunning as Whiplash (Mickey Rourke) calmly walks onto the racetrack to lay down the carnage, cleaving cars in twain with his electrified cables until he comes to Tony Stark's car.  The fight that ensues is not long, but it works, and the suitcase armor was incredibly cool...I need to get one of those...maybe from an estate sale or something.

Where Mickey Rourke stole his scenes with his nonchalant attitude and calculated genius, Sam Rockwell as Justin Hammer shown just as brightly and I never grew tired of him.  Rockwell was perfect as the overzealous business man, desperate for his moment in the spotlight, yet unable to attain the Apple level of hype that belongs to Tony Stark.  Speaking of Tony Stark, or rather Robert Downey Jr., he was just as large as...wait a minute...Robert Downey Jr. did not have nearly enough screen time as he did in the first film, where by all accounts he should have.  Sure there were scenes that he did what he does best, but I really would have liked to have seen more of him, and not necessarily in the suit.  Tony Stark is a larger than life character who deserves to be larger than his supporting casts.  I would have loved to have seen a few more business dealings, or some more puttering around the shop and not the one scene that I felt did not fit and broke the momentum of the film. 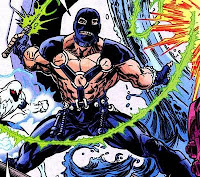 I am so glad that Whiplash did not wear this suit!
I am, of course, referring to drunken Iron Man DJing and then fighting with Rhodey in what ultimately becomes the War Machine armor.  My wife and I discussed the scene a bit this morning and we both came to the conclusion that seeing Stark--not Iron Man--screwing things up on a personal and business level would have been more appropriate a catalyst for a disenchanted Rhodey to steal the suit.  An even cooler addition would be for Iron Man to drunkenly attempt to stop Rhodey, who...in a suit he has never worn or attempted to pilot...gives Iron Man the easy smackdown.  Conflict, the hero falters, the hero redeems...the scene could have been better, but you can't please them all.

Aside from the one scene and the fact that I wanted a little bit more Tony Stark, the movie was a blast and one the I will buy on blu-ray when it gets released.  One other thing that completely made we giddy was the after credits extra in New Mexico that signaled the next Marvel movie.  I cannot wait.

P.S. - I would have written this whole thing yesterday morning, but my wife was up with stomach aches all night and Tulip at one point had a nightmare or something and began violently reverse sneezing, and I had to help calm her down.  No sleep for the Donist.

Lots of food, lots of beer, Iron Man 2 and almost no sleep part 2