Okay, I noticed these things near Coffee Cat a couple of weeks ago, and they have been weirding me the hell out ever since.  Does anyone else get the heebie geebies from these "sculptures?"  Am I the only one who finds them eerily reminiscent of the pods from the 70's horror movie Phantasm

?  They sure as hell remind me of them, and I want nothing to do with walking by the damned things.  For all I know, they might contain one of those butt-ugly jawa mother-fuckers from another dimension, standing by and waiting to drag me to hell. 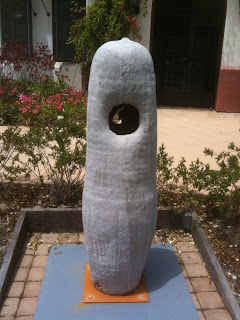 Butt-ugly Jawa on board
Some slight adjustments have been made to the model found in the movie, but I am fairly certain that these are used for the same general purpose.  Notice the spherical eye slit, which is now the perfect size to also transport one of the flying silver spheres with the blades and the drill that sucks out your brain.  You know what I'm talking about...the ones that made you scared to death to play baseball for the rest of your life, and forced you to sleep with your hand covering your forehead at night.  Thankfully there are only four of these things on display, but I assume they make multiple trips to hell with their unholy cargo when they are sucked into the parking structure under cover of the night. 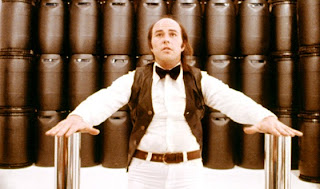 "I am soooo f-ing, f-ed."
I first saw Phantasm when I was about twelve or thirteen when I woke up one weekend night, unable to sleep and saw that my mom was still awake.  Earlier that day, I had seen a commercial on TV for Phantasm that night at 10:00PM and I intentionally kept myself awake, fully intending to tell my mom that I could not sleep and hoping to be allowed to stay up and watch the show; it totally worked.  I first became aware of the movie from my final year in Ohio, when I saw previews for the movie on TV and from the ads that I found when I would read through Fangoria and Heavy Metal magazines at the Clicks superstore while my mom shopped...I would also check out the pets upstairs and marvel that they actually sold something called "monkey chow," but that is something else entirely.  But, here I was finally watching the movie I had been dying to see for the past three years and I was not disappointed. 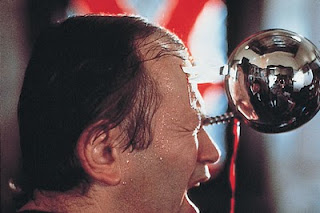 Sphere...apply directly to the forehead
Phantasm had everything that I could possibly ever want: tall scary men with magical abilities, butt-ugly jawas, a balding guy with a ponytail and a shotgun, graveyards, mausoleums, a finger/fly monster, extra-dimensional worlds, creepy as all hell music and mood, and flying silver spheres of death.  Awesome.  I am not sure of what my mom thought of the movie, but I was beyond thrilled, despite having some trouble sleeping later that night.  Since then, I have seen the film about five or six times, and I'm about due for another viewing.  I have also seen the acceptable, but not as cool, sequals, and although cheesy, Phantasm still creeps me out in the best way. 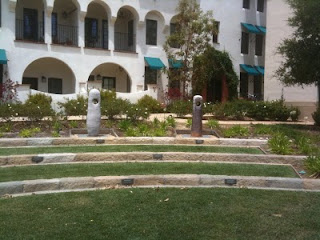 I know those bastards are in there.
If you are anywhere near Coffee Cat, swing by and check out the four butt-ugly jawa containment units, but don't get too close...a jawa, the tall man or a sphere might get your ass, stuff you inside one of these things and send you to hell to become a slave or force you to listen to Justin Bieber or something even worse. Before you go to see them, however, be sure to check out Phantasm

first, you will be terrified that you did.