It's an odd and funny thing how memories are triggered.  Just a few minutes ago, I was out at the Greenbelt of the Damned (see my earlier entries about this) throwing the ball for Tulip and generally having a good time, when I looked across the ravine to see a kid riding his bike on the bike path.  This in turn makes me think of Woodstock's Pizza, which gets me to thinking about how green and beautiful the grass is, which triggers a memory of rabbits, which all lead me to remember the act in Creepshow II

with the guy that says, "Hey lady.  Thanks.  Thanks for the ride."  This phrase sparks a memory of when I was attending UCSB and had to use the bus to get to class and back.

"Hey Donist, what do all of these thoughts have in common?" you might ask.  Well my ever faithful two readers (Hi Mom.  Hi our friends' dog Obie.), the answer is simple.  Beats the fuck out of me.  No idea.  That's just how my mind works, but it was the thought of my days of riding the bus that sent shivers of terror down my spine.

Now, don't get me wrong, I am completely for improving public transportation and a lesser reliance on cars in general, but back in the day, riding the bus was an ordeal.  It was not the long wait times between buses, or the somewhat randomly strewn bus stops hidden throughout the city, it was my fellow bus riders that gave me cause for concern.

I cannot even begin to remember how many times I had missed the express bus and needed to take either the 6 or the 11 to work or class.  The problem with these two lines is that they stopped everywhere along the route and never hop onto the freeway to cut travel time.  This is fine, since they were meant to cover the main parts of Santa Barbara and Goleta and a traveler could go from one mall to the next with ease, provided time was not an issue.  Unfortunately, the 6 and the 11 had a higher ratio of whack-job to calm-submissive individual than the express bus did and I witnessed it all.

On many occasions, I would board a relatively empty bus, and have a seat to myself, only to have some crazy person get on at the following stop, make eye contact with me and proceed to sit in the seat immediately next to me.  He/she would then stare at me for the remainder of my trip.  Keep in mind that there were plenty of other empty seats available for them to choose, they just decided that sitting next to me was the way to go.  From there it was a mixed bag of drunken attempts at chit-chat about how the person hates ____ (fill in the minority), proselytizing for what had to be a sex cult for Jesus, crazy conversations of which I was not invited to participate, or they would just stare silently at me, which had to be the most unnerving of all.  I quickly learned that if the bus had plenty of empty seats, the best thing to do was to take the one next to the window, block access to the other seat with my backpack, and the moment I saw someone that looked sketchy or that looked normal yet had a walkman with headphones, I would lean my head against the window and pretend that I was asleep or recovering from my own evening of debauchery.

Although my sleep schtick worked every single time and protected me being dragged into unwelcome one-on-one situations, that did not mean that crazy shit was not going on around me at all points in time. One particular day, I was riding on the 11 and it was fairly packed, with only a handful of seats available, when a very odd older woman boarded the bus.  She was older, with a wart on her chin, a black scarf tied around her head revealing a few wisps of graying black hair, dark sunglasses, and mostly black clothes save for her long skirt that had gray patterns etched into the fabric.  She also had a miniature cart for toting a single bag of groceries, although it was stuffed full of a random assortment of odds and ends.  The bizarre part about this woman is that she had a post attached to the little cart that had a cartoon witches head affixed to it, the kind that can be found in people's windows around Halloween...it was June. 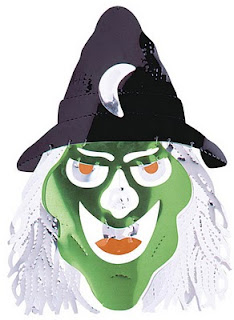 Hmmmm...okay, a woman gets on the bus at the beginning of summer, dressed all in black, looking like a witch and carrying a sign with witches head that looks, oddly enough, kind of like her; although without the green skin.  She was older, and there happened to be a free seat at the front of the bus, but another woman had put her bag of yarn balls on the empty seat.  Witchy-Poo asked--kindly I need to add--if she could sit in the seat and if the woman would mind moving her bag of yarn balls, and guess what...the woman refused.  Witchy-Poo was incensed and shook her witch face sign at the woman before turning away in a huff to find another seat.  A few stops later, Yarn Ball Lady got off the bus and the witch woman said in a loud ominous voice, "Wicked creature," and again shook her witch sign at her.  I would have laughed if I wasn't so blown away by the random weirdness that had just played out.

Another time, I was sitting outside of my evil music corporation store and waiting for the bus to campus when an incredibly attractive woman sat on the bench next to me.  We smiled shyly at one another and as luck would have it, the bus pulled up, but, being my luck, the woman was waiting for different bus.  I stood to board and noticed a sketchy bum walk up to sit next to the woman.  I turned back to look at her just in time to hear him say, "Huh...it looks like it's just you and me kid."  The beautiful woman's eyes opened wide in worry just as the bus door closed and it pulled away off towards UCSB.
Goddamn, who in their right mind actually says something like that?