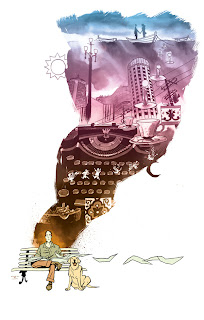 Right around mid-December, I took a chance on a new comic published through DC Comics' imprint Vertigo Comics and I discovered a book unlike anything that I had ever read before. There were no tights, capes, magic weapon wielding gods or sorcerers of incredible power. This was a story of Brás de Olivia Domingos, an obituary writer living in Brazil and trying to reconcile his life in regard to that of his father, a famous author.
Daytripper was unlike anything that I had ever read before, and this issue resonated with me for days afterwards. The creators, twin brothers Fábio Moon and Gabriel Bá from Brazil, have released a few books domestically (Casanova, the Umbrella Academy and various other projects), but Daytripper, to my knowledge, is the first collaboration from the pair to see print from one of the largest comic companies. The first issue ends in such a way that is completely jarring and unexpected, leaving me wanting more, but at the same time questioning how the ten issue series would be handled going forward.
Then the second issue was released, again concerning a brief critical moment in Brás life and again with a completely unexpected ending. The third and the fourth issues followed, each continuing along the same theme, each greatly tugging at my heart and causing me to think about life and love and where things can go wrong, where things can be taken for granted. For days afterwards I would think about each issue, the gorgeous lyrical art, the honest-to-a-fault writing and how together every page becomes a grand stage that readers get to view and experience. Upon rereading each issue, I finally noticed -- dimwitted me -- that each issue is not chronological and the story is beginning to fall together slowly and some things are beginning to make more sense, but there are odd components in the story: each ending, the man in the boat near the end of issue two.
After each issue, I find myself anxious for the next, much more so than any other comic that I am currently collecting, and there are a few that I really enjoy, but none so much as this. Daytripper is something else entirely. I am already wishing for a beautifully arranged hardcover edition of all ten issues, yet I must wait month by month for each issue to come out. But, that is fine. I will wait and reread the ones that I have and consider my own life and the times ahead. A beautiful, beautiful book that I cannot more highly recommend.
Please visit http://fabioandgabriel.blogspot.com to see news on Daytripper and other projects!