Welcome back, Donist World Denizens! For those of you new to our site, I’m Donist, and I am joined by Donist World CFO the Reverse Obie* (my friends’ Boston terrier whose fur recently swapped colors) and by our marketing director/administrative assistant/party planner/Frisbee freak Tulip (my dog, Reverse Obie’s sister). Wow...I totally passed out there for like half an hour…maybe longer. Tulip and Reverse Obie are still sacked out, but I’m sure they’ll begin to stir when I crack open a nice, cold, hazy IPA from Modern Times. Before I do that, however, I got more comic book goodness to tell you about, so please have a look. Anyhow, be kind to each other, mind your health, keep your pets safe, cherish the ones you love, hydrate, and read some great comics. Oh, and go see Deadpool 2, by golly. It’s freakin’ great! Thank you for reading!


Going back and digging up all of my old graphic novels from the ’80s has been a blast. Taking them out of the foreboding closet of doom not only reminded me of many that I had forgotten I ever owned, but also sparked a need to read some that I was never able to buy at the time, while my research uncovered a bunch I never knew even existed. Today, we’re looking at two more I have read and highly recommend, as well as creating a quick-fire hit list of some I desperately need to track down. 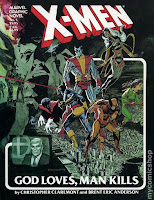 Sometimes you come very late to the party. Still, you get there, have a great time, and really solidify the event in your memory, but even though you might think thank goodness I made it there, you will always have that nagging afterthought of I wish had been there right when it all started. Such is the case with X-Men: God Loves, Man Kills; I read it for the first time last week. The book explores many of the themes for which X-Men comics, animated television shows, and movies have long been known: the persecution of mutants because they are different. After two mutant children are murdered by members of Reverend William Stryker’s secret militaristic group of religious extremists, Magneto investigates what happened. Meanwhile, the X-Men are out on the town and encounter some anti-mutant douchebaggery that sets them all on edge. It isn’t until Professor Xavier, Storm, and Cyclops are seemingly killed in a car accident that Magneto arrives to tell Kitty Pryde, Colossus, Wolverine, and Nightcrawler that all might not be as it seems. This is a fantastic, iconic story and one that all fans of the X-Men must read at least once in their lifetime. Anderson’s art is beautiful and fittingly dark to reflect the mood of the story, and Claremont gives us a powerful, allegorical tale about the regressive wrongness of racism/sexism/homophobia/xenophobia/you name it and of the perils of religious zealotry and hypocrisy. Given the current political climate in our country, it is even more troubling that three and a half decades after its release this book continues to be a reflection of the worst parts of our society, which makes X-Men: God Loves, Man Kills an even more important read for the times.


Grendel: Devil by the Deed

(Everythinged by Matt Wager, inked by Rich Rankin, published in 1986 by Comico The Comic Company) 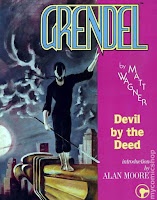 I cannot properly tell you how thrilled 16-year-old me was to get this graphic novel for Xmas. I remember seeing it on the shelves of my LCS and in various ads within Comico’s amazing Elementals (Everythinged by Bill Willingham) comic, but I finally owned it and fell in love with Wagner’s work right then and there. Now, I realize that this graphic novel is not an “original” graphic novel and was actually serialized as a backup story within the pages of the must-read Mage: The Hero Discovered #6–14, I still count this as part of the group because of the 8 ½ in. x 11 in. format and the 48 pages that allowed the collection to be featured prominently alongside the best that Marvel and DC had to offer. The book tells the story of Hunter Rose, a hugely successful author who, unbeknownst to the world is also the masked crime boss Grendel. The fearsome Argent, or “The Wolf” as he is known because of his startling appearance, is tasked with bringing Grendel down. What continues to make this book so near and dear to my heart is the gorgeous Art Deco style that inspires Wagner on every page and the lack of word balloons and captions that have been replaced by lengthy blocks of text that are in no way cumbersome and that succeed in making my beat-up, much-loved copy of this masterpiece one of my most prized possessions; I also adore the unique air-brush-style coloring Wagner painstakingly uses throughout. There are many ways to read this story: 1) within the original pages of Mage: The Hero Discovered #6–14; 2) in this gorgeous graphic novel (my choice!); 3) in the 1993 Darkhorse reprint that was recolored by Bernie Mireault; 4) the 2007 Darkhorse hardcover that was recolored again only this time in black, white, and red; 5) finally, in the smaller form factor Grendel: Omnibus Vol. 1 that features the black, white, and red coloring. Regardless of how you acquire this story, just be sure you read it!

Ones I Have Not Yet Read but Want to Read…

Killraven: Warrior of the Worlds

(Written by Don McGregor, illustrated by P. Craig Russell, published in 1983 by Marvel)
I own this one, and I am excited to read it, I just want to get fully caught up on the character of Killraven in the pages of Amazing Adventures before cracking into what is certain to be a visually stunning experience. I read a bunch of Killraven stories back in the day and this sword-wielding, futuristic hero has me once again excited to dive back in.

(Everythinged by Jim Starlin, published in 1983 by Marvel Comics)
Okay, this one has a complicated publishing history if you want to get the whole story but it is one I desperately need to read as soon as possible; Starlin, baby, I just gotta read it. Okay, this graphic novel is part three of the “Metamorphosis Odyssey.” Part one occurred in the pages of the sorely missed Epic Illustrated magazine. Part two jumped over to publisher Eclipse Comics for The Price. The third volume, this graphic novel, occurs at the same time as The Price and the final pages supposedly bring the two stories together before Vanth Dreadstar appears in a short story for Epic Illustrated #15, which leads into Starlin’s run on the ongoing Dreadstar series, which I thankfully have read. I need to go back and check out the entire “Metamorphosis Odyssey” which I hope to do soon in the easy to obtain Dynamite collection. 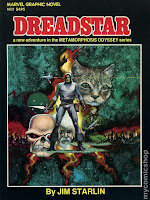 (Everythinged by Walter Simonson, published in 1983 by Marvel Comics)
What is this about? I have no idea. What I do know is that it is sci-fi Simonson and that I can get the graphic novel, the first four issues, and the concluding special all in one hardcover edition. 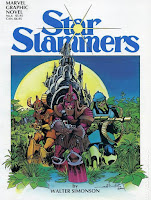 The Incredible Hulk and the Thing: The Big Change

(Written by Jim Starlin, illustrated by Bernie Wrightson, published in 1987 by Marvel Comics)
Starlin. Wrightson. They had me with either of those names. I don’t think this has been reprinted in any other format, which kind of bums me out as this one might be a bit pricey to obtain. 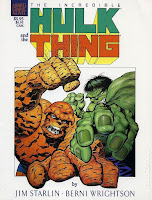 (Written by Stan Lee, illustrated by John Buscema, published in 1988 by Marvel Comics)
I still kick myself for not picking this one up back when I first saw it. Seriously. Why did I not buy this? Surely, I was flush with cash from my KFC job...who knows. The Silver Surfer and Mephisto?! All I know is that I need to somehow get ahold of this ASAP. 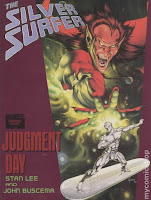 (Written by Pat Mills, illustrated by Kevin O’Neill, published in 1986 by DC Comics)
I am a HUGE Marshal Law fan and I also have a bunch of Nemesis the Warlock books just waiting to be reread. Metalzoic is one of those big regret-I-didn’t-buy books that I hope finally get in my hands someday in the future. That said, I also hope to read ALL of the other DC graphic novels that came out in the ’80s, as the company was taking a huge risk by embracing original sci-fi and fantasy stories that had nothing to do with their huge stable of superhero properties. These are the DC graphic novels I hope to find someday: 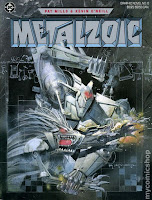 I’m sure there are plenty more ’80s graphic novels out there that I need to read, but after four installments of “For the Love of OGN: The ’80s,” I have given all of us plenty to either revisit and even more great books to track down. Happy reading and hunting! Now, I wonder what all came out in this format in the ’90s? Hmmmmm...

Denizens, I’m fried. Not only did I slip into a taco and beer induced sleep after lunch, I just never really fully woke up. No regrets, though, the Norteño taco (steak, beans, guacamole) and the Chorizo con Papas (chorizo, potatoes, blue corn tortilla) and chips and guacamole with at Corazon Cocina are the best things on the planet. Anyhow, what I’m trying to say is that I’m going to keep this short. All three books listed below come VERY HIGHLY RECOMMENDED!