Welcome back, Donist World Denizens! For those of you new to our site, I’m Donist, and I am joined by Donist World CFO the Reverse Obie* (my friends’ Boston terrier whose fur recently swapped colors) and by our marketing director/administrative assistant/party planner/operation Deadpool v2.0 Tulip (my dog, Reverse Obie’s sister). Dagnabbit. I fully intended to see Deadpool 2 last weekend, but things didn’t quite go as planned, so it didn’t happen. That said, I have three full days to get my act together, have some tacos, have a couple beers, and then check out this follow-up to one my favorite movies of 2016. Anyhow, be kind to each other, mind your health, keep your pets safe, cherish the ones you love, hydrate, and read some great comics. Oh, and go see Deadpool 2, by golly! Thank you for reading!


It’s kind of amazing how many OGNs were released in the 8 ¼ -inch by 11-inch format throughout the ‘80s. They were a big deal back then, and they should still—mostly—be a big deal now as well. They were larger than regular comics, they had a higher quality paper, they had two to three times the number of pages, and they mostly told done-in-one stories that existed outside of regular comic books superhero continuity. However, if you didn’t care about capes-and-tights tales, there was much to be excited about from this new graphic novel format. You had horror, fantasy, science fiction, crime, war, and even romance, none of which had anything to do with men bitten by spiders or men utilizing a bat as their fashion muse; there was something for everyone. These books were a reflection of a time when comic companies were willing to take risks in hopes of achieving great rewards, which leads me to the first book of the day…

(Written by Chris Claremont, illustrated by Bob McLeod, published in 1982 by Marvel Comics) 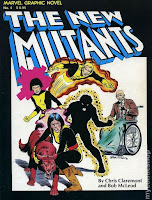 Here we have a graphic novel that expands upon the explosive popularity of Claremont’s The Uncanny X-Men, where we are introduced to a new group of mutants, youngsters with incredible powers who Professor Xavier hesitantly agrees to mentor and train after an old foe sets out to kill the kids. Part of Xavier’s reluctance is that he believes his X-Men to be dead—they are actually at the far ends of outer space fighting the alien Brood in one of my all-time favorite X-Men chapters!—and thus Cannonball, Sunspot, Wolfsbane, Karma, and Danielle Moonstar become The New Mutants. This fourth release in the Marvel Graphic Novel line not only told a complete and thrilling story, it also ushered in a new series that ran parallel to The Uncanny X-Men. The two series would oftentimes see characters crossing over from one book to the other, but The New Mutants had its own heft, its own fan base, that with or without the regular X-Men characters continues to captivate audiences today regardless of who happens to be on the team at any particular moment. I will admit that as much as I wanted to delve into the world of The New Mutants back in the day, it wasn’t until late 2017 that I first read this graphic novel, which is contained in the must-read Marvel Epic The New Mutants: Renewal. In this wonderful collection, you not only get the graphic novel, but the first 12 issues of the series, an issue of The Uncanny X-Men, the miniseries that expands on that issue called Magic #1–4, as well as a bunch of other goodies; “Epic” is the perfect word to describe this monster of a book. The best thing about being this late to the game is that I have lots and lots of catching up to do.


Dracula: A Symphony in Moonlight and Nightmares

(Everythinged by Jon J. Muth, published in 1986 by Marvel Comics)

Remember how I keep droning on about how wonderful it was that the Big Two were so willing to take risks and experiment back in the day? Well, Dracula: A Symphony in Moonlight and Nightmares is a shining example of this. Not quite an adaptation of Bram Stoker’s Dracula, and not at all like any of the Marvel Graphic Novels that came before or after it—there are no panels, no word balloons—this book is more a poem adapted from the great work set to a backdrop of the haunting, sensual, watercolored art of master painter Jon J. Muth. I remember seeing this on the shelves of my LCS back when I was a kid, and I definitely flipped through it, but it would be three decades before I actually got to read it. The poetry is a bit hard to follow, but it is lyrical, beautiful, but the main draw is Muth’s art which has to be seen to be believed. If you are as big a fan of painting as a means of graphic storytelling, then this is one you must seek out.


The Squadron Supreme: Death of a Universe

(Written by Marc Gruenwald, art by Paul Ryan and Al Williamson, published in 1989 by Marvel Comics) 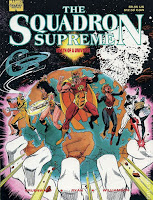 The Squadron Supreme 12-issue maxiseries was a book I absolutely loved as it was coming out; it also totally messed me up. I knew of Marvel’s analogs to DC’s Justice League characters who at the time were called the Squadron Sinister from their various mentions in the pages of The Avengers, but my brother and I never read those comics—actually, I still haven’t read those issues…hmmm. But when the first issue of the maxiseries appeared, I pounced on it and fell in love with the large cast of characters. Through the course of this series, I became acquainted with the ideas of cancer, irreconcilable differences within a team, politics, the criminal justice system, and the weight of balancing safety versus freedom. It’s a heavy book where heroes cross lines they never should have crossed and people die; things are not tied up in a pretty bow when all is said and done. It’s powerful stuff and although the book ended with the twelfth issue, I desperately wanted more, and unbeknownst to me, more came in 1989 with a new Marvel Graphic Novel that I did not learn about until 15 years later. In this follow-up, the Squadron Supreme has picked up the pieces of the fallout from the events of the maxiseries and they are forced to come together to thwart an extinction-level threat to Earth. Again, don’t expect this to a cakewalk through the daisies. It’s harsh. It’s brutal. It’s moving up to the top of my reread pile. Absolutely DO NOT read this graphic novel until you have read the amazing 12-issue series (there is a trade!). A somewhat-rare Omnibus collects it all, or you’ll just have to pick them up separately.

(Written by Steve Gerber, illustrated by Val Mayerik, published in 1984 by Marvel Comics)

Okay. Here you go. This is what I’m talking about in regard to taking chances. Void Indigo seems more likely to have appeared in old issues of Heavy Metal Magazine as opposed to a book published by a company renowned for its superhero comics. This fantasy/sci-fi tale of revenge features some fairly psychedelic, lovely, painted artwork from Mayerik, and has its fair share of nudity, violence, and trippy goodness. It’s also one of the few Marvel Graphic Novels that doesn’t quite tell a full story, rather it is a setup to the Void Indigo series from Epic that quickly followed and was quickly canceled after two issues because of something scandalous within the comic book series. What was it that was so scandalous that the publisher decided to cancel the series before it could finish up by the sixth issue? What exactly pissed people off so bad that the book had to be tossed? I am not sure, but after reading and loving this Graphic Novel, I fully intend to find out. This book concerns a barbarian warrior and his lady love who are tortured and murdered by four Atlantan sorcerers in an effort to prolong their own wretched lives. The power of revenge reincarnates the barbarian as an alien warrior who finds himself stranded on Earth and filled with the need to extinguish the light of the four sorcerers’ lives. If you are familiar with Gerber, you know you’re in for a crazy ride, and that is exactly what you get. Check out this mind-bending series if you think you can handle the experience.

(Everythinged by Mike Saenz, published in 1988 by Marvel Comics) 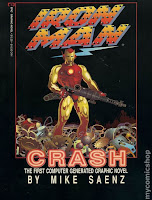 I had this book…once upon a time. What happened to it I don’t remember, but what I do remember is being excited about the first ever computer generated graphic novel to ever hit the stands. What was this book about? I don’t remember in the slightest. Not a lick of it. I almost completely forgot this came out until something sparked a memory of its existence earlier this morning. Now, this one might have the whippersnappers scratching their heads every bit as much as handing them a cassette of your favorite disco mixtape, but y’all are just gonna have to trust me when I say the pixelated line work was an impressive feat for the time. From what I could find, this book is about Tony Stark creating some sort of weapon that everyone wants, including a certain evil group called the Digital Dreadnoughts. Other than that, your guess is as good as mine as to what all is going on, but now I have a need to hunt it down and check it out with a fresh set of eyes. One thing to note is that this book is not part of the Marvel Graphic Novel line and appears to be its own thing. Weird, experimental, groovy. I can dig it.

After two weeks, I only had three books in my pull which I hope to get to later this afternoon. So, nothing new to report.