Welcome back, Donist World Denizens! For those of you new to our site, I’m Donist, and I am joined by Donist World CFO the Reverse Obie* (my friends’ Boston terrier whose fur recently swapped colors) and by our marketing director/administrative assistant/party planner/overwatcher Tulip (my dog, Reverse Obie’s sister). Although it was a short week because of Labor Day, Tulip, Reverse Obie, and I still found ourselves quite busy with our work, side projects, and exercise schedules, but we are here and ready to go and…and…and…ready for a dang nap. So, while we catch some much-deserved shut eye, order a burrito, grab a tasty beer or refreshing iced tea, relax, and while you’re at it check out some great comics. Thank you for reading!


In case you missed the post Introduction to “Comics Lust” where I explained the slight change in direction I’m taking with Donist World, what you need to know is that every week I will tackle a different topic and provide a bunch of comics I have read and recommend, or the names of titles I hope to read in the near future. I will then follow with a brief rundown of the comics I read that week. Cool? Cool. Let’s go.

The act of contributing one aspect of the comic creation process—whether that be writer, penciller, inker, colorist, or letterer—is a herculean endeavor in and of itself. But having someone who tackles one or more responsibilities on a book is something not often seen. If that person is both writer and artist, it is truly rare. Show me someone who successfully does absolutely everything on their comic and you have someone quite special, indeed. Whenever I use the term everythinged, I’m generally not exclusively referring to the type of creator who handles it all, but rather I use the term as a general catch-all for someone who is at least a writer-artist.

In this exclusive club, Jack “King” Kirby has to be at the top of the list, but I will save looking at Kirby for later as he deserves a chapter all to himself, which I will write in the near future. That said, Happy recent 100th anniversary to the “King,” and I am definitely eyeing that Fourth World Omnibus that will have all of his work from Superman’s Pal Jimmy Olsen, The New Gods, The Forever People, Mister Miracle, and other goodies coming December 2017.

Writer-artists cover the spectrum of comic book genres, but if you’re in a bit of a mood, then nothing will feed that monster of self-reflection and sadness more than the titles I mention below. I recommend grabbing a pint of ice cream (mint chip is my favorite), grab a box of tissues, and know that things might get a little rough from here.

Jeff Lemire is one of my favorite modern comic book creators. He had his start in the indie scene but has since created a respectful body of work published by Marvel, DC, Image, Dark Horse, and Valliant covering everything from superheroes to sci-fi. The must-read work that put him on the Big Two’s radar is Essex County, a trio of intertwined, real-world tales that strike so close to the heart as to leave readers wiping away the tears. One of the stories centers around a hockey player, and although I loathe sports, I was so drawn in by the character’s story, I could not put the book down. Such is the way with much of Lemire’s comics, especially the ones from smaller publishers. Expect plenty of heartbreak from his writing and cartooning found in the likes of The Underwater Welder, Lost Dogs, Royal City, and Roughneck (which I have not yet read). He also made his mark on DC Comics’s Vertigo imprint with the time and space love story Trillium, the Invisible Man inspired The Nobody, and my personal favorite of all his writer-artist work Sweet Tooth, about a boy with antlers in a post-apocalyptic world where animal-hybrid children might hold the key to mankind’s survival in world that might not be worth saving. Lemire’s work has a tendency to leave me an emotional wreck, but I honestly wouldn’t have it any other way. Any of his books work as a starting point and you can then jump from one to the next.

Terry Moore’s masterwork, Strangers in Paradise , is the only comic book I ever had to briefly set down lest I break out sobbing on a train ride home from San Diego back in 2008. One particular moment in the story was so harsh, yet so overwhelmingly beautiful, so hopeful that I could barely keep myself together. Strangers in Paradise, or SiP as it’s known to its fans, is the story of Katchoo, a woman who has much going for her, who is in secretly in love with her best friend Francine, who’s life is not going so well, but then David arrives and is determined to win Katchoo’s heart. Moore’s art can tell you the emotional weight of the scene with but a few panels detailing a slight shift in a smile or the narrowing of the eyes. His women are also positively gorgeous but all his characters ultimately charm. His work doesn’t end with SiP, as he followed with a wonderful sci-fi epic about a woman who comes in contact with a mysterious metal that gives her special abilities called Echo that delivers its share of gut punches and excitement. He followed that with Rachel Rising about a woman who rises from the dead and attempts to find the man who killed her and left her in a shallow grave. Predominantly a horror title with a fair sprinkling of laughs, Rachel Rising invested me so deeply in its characters that I fell completely in love with them, especially secondary character Aunt Johnny. You can’t go wrong with any of Moore’s books, and I suspect that his newest title, Motor Girl, won’t let you off easy yet will dazzle you nonetheless.

I read Craig Thompson’s 592-page, emotional roller coaster, Blankets, over two days and related to the book almost too much. I was lucky enough to escape the perils of semi-abusive parents bent on inflicting a fundamentalist Christian religion upon my little brother and me, but the rest of this beautifully illustrated book was a warm reflection to much of my own life experiences: my brother and I shared a love of art; I remember the cruelty of other children, of isolation; the melting away of the world and its myriad problems with a first kiss; the abyss of your first love falling apart. Blankets is a rough read, but one I found impossible to put down. Rest easy, though, it’s not all gloom and doom. There’s hope, growth, and a personal acceptance of who you are and being okay with that. I seem to remember going for a long walk after reading this wonderful book in an effort to reflect on my own life and finding joy in the things that truly matter. 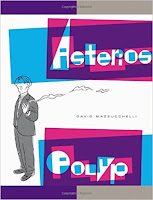 Asterios Polyp is the masterwork of David Mazzucchelli, who many know all too well from his legendary illustrations on Batman: Year One and Daredevil: Born Again—both written by Frank Miller. Here, Mazzucchelli, who also teaches cartooning at the School of Visual Arts in Manhattan, handles everything on this beautifully produced book from Pantheon. Asterios Polyp is a middle-aged Architect and teacher who, for better and usually worse, has used his position and status to bring multiple students to his bed, but when a fire burns down his New York City apartment, he takes stock of his life and finds it empty without Hana, the love of his life. Mazzucchelli uses both precise line and flat color schemes to tell the story every bit as much as his characters’ dialogue as he jumps back and forth from the past to the present. By no means an easy read, Asterios Polyp is an essential one, and the physical copy of this treasure rests firmly on the top left of my favorite bookshelf. I think it’s time to give this one a re-read.

Now, I realize there are many more writer-artists out there who could fall into the “Heartbreak” category, but some of the others I was considering also fall more prominently in different categories such as humor or adventure or historical or what have you than in the realm of broken hearts and paths not taken; I will examine them in other chapters. For now, though, pour that glass of wine, turn your phone off, slip into a hot bubble bath, and prepare to be enveloped in lovely art and words all created by one person who will lead you to love and care for their characters to such a degree you don’t to see them suffer. Unfortunately, life is not easy.

Seven to Eternity #9 (written by Rick Remender, illustrated by Jerome Opeña, colored by Matt Hollingsworth, lettered by Rus Wooton, edited by Sebastian Girner, published by Image Comics) This is hands down my favorite fantasy comic book on the shelves, and is tied with Descender (by Jeff Lemire and Dustin Nguyen) as my favorite comic series of 2017. Opeña is back on art after a two-issue break to deliver some of the most stunning character work, storytelling, backgrounds, and creature design you will find anywhere else. Hollingsworth’s colors—dang, those mushrooms!—are captivating, and Remender actually turns the deplorable Mud King into a sympathetic character, which is something I thought impossible. It will be a long four months until the next much-anticipated issue.VERY HIGHLY RECOMMENDED!

Batman: Detective Comics Vol. 1: Rise of the Batmen (Rebirth) (written by James Tynion IV, illustrated by Eddie Barrows and Alvaro Martinez and Al Barrionuevo, inked by Eber Ferreira and Raul Fernandez, colored by Adriano Lucas and Brad Anderson, lettered by Marilyn Patrizio, published by DC Comics) Okay, I had pretty much checked out of DC’s Rebirth comics, but ended up buying this Detective Comics trade on a whim. Holy Guacamole! I have been missing out. Batman gathers Batwoman (love what Greg Rucka and J.H. Williams III did with her), Red Robin (Tim Drake, who I know little of but totally dig), Clayface (a groovy goop monster who was once a villain and given a chance at redemption), The Spoiler (who is Stephanie Brown, a character I know nothing of yet need to remedy that ASAP), and Orphan (a kind of creepy ninja force of nature who I need to know more about ASAP, as well). Basically, an army of Batmen appear who have been monitoring Batman and the rest of the group and have a mysterious agenda for which no one will stand in their way. Super fun and with high stakes that had me biting my nails throughout. I MUST get the second volume and quick. VERY HIGHLY RECOMMENDED!