Welcome back, Donist World Denizens! For those of you new to our site, I’m Donist, and I am joined by Donist World CFO the Reverse Obie* (my friends’ Boston terrier whose fur recently swapped colors) and by our marketing director/administrative assistant/party planner/chicken burrito biter Tulip (my dog, Reverse Obie’s sister). <phew> We had a break in the heat, and with any luck, we can ease into fall, my favorite season, a bit early. Nothing beats getting cozy with my puppy executive team and some amazing comics while drinking a pumpkin ale served in a cinnamon-rimmed glass. So, while we start to plan our spooooky reading list for the month of October, grab a tasty beer or refreshing iced tea, relax, and while you’re at it check out some great comics. Thank you for reading!

*Obie, through his dabbling in arcane magiks mixed with ancient corrupt business practices, has had not just the colors of his fur switched, but a complete overhaul of his work ethic as well…I think I’m kinda okay with the mishap.

As a kid, I frequently wondered what would happen if Daredevil met Batman, or if Superman fought the Hulk, or if Thanos fought Darkseid. I knew there was a Marvel comics and a DC Comics, each holding the reins to their own stable of characters, but I didn’t understand why they couldn’t frequent each other’s worlds and fight or work together to face the common enemy. The only time such epic meetups occurred was when I busted out my Mego dolls. What I didn’t understand was that Marvel and DC are comic brands vying for an increased market share and that those brands needed protecting and to not be diluted; the customer needed to know which character belonged to which company. I didn’t understand that intermixing of properties involves multipage contracts dictating which company owned what, who would be paid what percentages, what formats were covered by the agreement, whose name would be listed first, what creators would be involved, was there an anti-poaching clause for the talent, movie rights, digital rights, reprint rights, print runs, and so much more. There are so many moving pieces involved in getting my dream Swamp Thing and Man-Thing meetup—I’m still waiting for this one to happen, by the way—that it’s a wonder any cross-company crossovers occur at all, especially when the Big Two are concerned.

But they do happen. 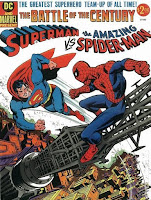 The earliest crossover I remember was the Superman vs. the Amazing Spider-Man Treasury Edition, a 96-page beast written by Gerry Conway and illustrated by Ross Andru and Dick Giordano. For those not in the know, Treasury Editions were giant-sized comics much larger than even most magazines at a 10"x14" format and although they often reprinted popular stories, some contained original content as is the case with Superman vs. the Amazing Spider-Man. Even during the dark ages of no internet, I knew of Marvel and DC’s first joint venture from 1976 because of the deluge of ads promoting the book in all of the comics I was reading at that time. I would love to check out the first meeting of Spider-Man and Superman as they take on Doctor Octopus and Lex Luthor, but I will probably have to settle for reading one of the regularly-sized—and still pricey—versions lurking out in the wild. There are also a couple of other cross-company, Treasury editions:

When I first saw Marvel and DC Present: The Uncanny X-Men and the New Teen Titans #1, I had to rub my eyes to be sure I was seeing things correctly. My brother and I had already been falling deeply in love with all things The Uncanny X-Men, and The New Teen Titans was always on our radar as a comic we wanted to read but was usually the one left on the spinner rack after Mom gave us the dreaded, “I said you could each have one comic book.” The need to own this particular comic-to-end-all-comics, however, forced us to launch a “Please please please please please” barrage on our poor mother before which even her steely resolve stood no chance to deny. Released in 1982, written by Chris Claremont, and illustrated by Walt Simonson, this comic had everything: our favorite X-Men characters, the Teen Titans characters we wanted to know so much more about, Deathstroke the Terminator, the evilest-of-evil Darkseid, and the glorious scourge of the universe Dark Phoenix. We literally reread this issue until it completely fell apart. Thankfully, there is a not-too-badly-priced 1995 reprint version easily found that all comic book fans need to check out.

In the mid-’90s, Marvel and DC once again had their characters collide in a handful of issues, but it was the massive events that garnered the most attention. DC Versus Marvel #1–4 (written by Ron Marz and Peter David, illustrated by Dan Jurgens, Claudio Castellini, Joe Rubenstein, and Paul Neary with issues 2–3 actually titled Marvel Versus DC) was the event I would have fainted over had this been around when I was kid. It is essentially a knock-down-drag-out battle royale of a mini-series where DC characters meet Marvel characters in one-on-one combat. Think Thor versus Captain Marvel, Batman versus Captain America, etc. The mini has been collected, but it is currently out of print and fairly pricey.

Possibly the weirdest collaboration between the Big Two came in 1996 and 1997 when the companies merged a character from Marvel with a character from DC to create such pairings as the JLX (Justice League of America with the X-Men), Dark Claw (Wolverine and Batman), Doctor Strangefate (Dr. Strange and Dr. Fate), and so on. In a more bizarre maneuver, Marvel and DC merged their logos and brands into a fictitious company called Amalgam Comics. Each publisher subsequently released six individual issues for these newly created characters as if they had been around for years. These 12 issues all dropped between the third and fourth issue of the DC Versus Marvel event.

Then, at the end of 1996, the companies released a four-issue mini-series titled DC Marvel Access #1–4 (written by Ron Marz, illustrated by Jackson Guice and Joe Rubenstein), which again pitted hero against hero.  In 1997, following DC Marvel Access, each company published another six issues under the Amalgam name with some new combinations of characters and a return of others from the previous year. To top all of that off was Unlimited Access (written by Karl Kesel and illustrated by Pat Olliffe and Al Williamson). It took me a while to wrap my head around the whole sequence of events for these books as it is all quite confusing, but realizing the effort involved to make this incredibly fun event happen is a daunting thought. I can picture a couple insane accountants from each company still attempting to work through the quagmire of royalty payments two decades later. In an effort to maneuver through this complicated, multi-year, cross-company crossover event, here is the release schedule:
As confusing a roster as this is, and as difficult a task as it may be to locate the scarce issues/collections, what the Amalgam comics offered was a fresh take on superheroes free from the constraints of adhering to continuity. Most of all these Amalgam issues were fun, with the Versus and Access issues giving us comic fans the rare opportunity to settle some disagreements with our friends over who is stronger than who. Okay, probably not, but it definitely got us talking.

One mini-series that I only just learned about is JLA/Avengers #1–4 written by Kurt Busiek and illustrated by George Perez from 2003. How did this get by me? How could I have not known about this? How hard is it going to be for me to track this one down? I have no idea, but I do know I need to read this as soon as possible. I don’t want to know what this one is about until I’ve actually tracked down a copy of the trade, but I’m sure resourceful fans can find a synopsis of what is certain to be one heck of an entertaining book.

There are scores of other cross-company crossover comics out there with many of those concerning Batman and Superman, Predators/Aliens/Terminators, and of course Archie Comics, but those are for another day. Now, to see if I can track down some of the ones I somehow missed out on the first time around. With any luck, Marvel and DC will get around to reprinting or offering some of the more rare comics digitally. Fingers crossed.

Mage #2 (Written and illustrated by Matt Wagner, colors by Brennan Wagner, lettered by Dave Lanphear, consulting editor Diana Schutz, design and production by Steven Birch, published by Image Comics) Oh boy…I am so loving this comic; the nearly two-decade-long wait was so worth it. Here we see Kevin Matchstick interact with his family and see the toll that constantly moving to avoid the forces of the Umbra Sprite has taken. We also see Kevin attempt to keep his abilities secret from his increasingly observant son. The ending battle and awesome final splash page made me want to give a victorious cheer. The third issue needs to get here quick! VERY HIGHLY RECOMMENDED!

Mister Miracle #2 (Written by Tom King, illustrated/inked/colored by Mitch Gerads, lettered by Clayton Cowles, published by DC Comics) I have to admit I don’t exactly know what the heck is going on in this issue, but I also have to admit that I do not care. I love it! I know that Orion has enlisted Mister Miracle and Big Barda to partake in a battle against Granny Goodness and her forces, but when it comes to who’s pulling whose strings, I’m not certain; which is where King wants us. The intimate moments between Scott and Barda are rough going given their issues from the first issue, but the meetings with Granny Goodness are the definite shocker of the issue. King and Gerads are owning this tremendous book. VERY HIGHLY RECOMMENDED!

Black Science #31 (Written by Rick Remender, illustrated by Mateo Scalera, colored by Moreno Dinisio, lettered by Rus Wooton, edited by Sebastian Girner, published by Image Comics) Grant McKay is back as he attempts to save his children and his world from invading space ghosts and death cult millipedes. One problem: maybe Grant’s children are the ones who will be doing the saving. This issue kicks off the latest chapter of Black Science and continues Remender’s streak of fantastic creator-owned comics. HIGHLY RECOMMENDED!

Your body of work gave me a love of comics and influenced me to become a writer. I am so glad I got to meet you. You were taken from this world far too soon.