Um...yeah.  Um...I just hit the big "4-O."  In the past, I have always extended my birthday celebration for as long as possible.  If I could get a month out of the revelry, I would do it.  Three mudd pies over two days...cool, it was my birthday four days ago, I'm in.  Another tequila shot?  Heck my birthday was two weeks ago, why the hell not.
This time though, I wasn't all that excited.  I had reached a milestone.  Suddenly, I was no longer in the same age bracket on the Best Buy receipt survey which has never awarded me the $5000 gift card despite how often I mark their store as a "9" or "10."  I had left my original, more comfortable 31-39 bracket for the new 40-55 that had been looming before me for years.  But then I thought, "I really want an iPad.  Shit, my birthday is coming up in a month and it's a big one.  Do it, Donist.  Do it, you son of a bitch.  You deserve it."  So I did.  I also treated myself to a mountain of graphic novels, extra beers and food to the point that I have to be careful not to gain back the weight that I lost.
Now that it has come and gone, however...I still have almost three weeks to buy tons of crap, eat a lot, drink a lot and insist on doing the things that I want to do, because I just turned 40 goddammit and I deserve it!  Fuck it.  Maybe, because it is a milestone, I can stretch this out until the new year.  Pre-40 was uncertainty and trepidation, Post-40 is BFD and let's keep this shit going...although dialing things back a bit  on the calorie front and being sure not to stay out too late...I do need my sleep, and there are reruns of the Greatest American Hero.  Isn't Johnny Carson on tonight?
Friday Slice Of Heaven
My Birthday on 10/05 - My wife rules, plain and simple.  I woke at 5:30 AM to work on revising--again--my novel and Amy was up at 6:00 AM making me pumpkin waffles and Blue Bottle coffee.  Pumpkin...f_ing...waffles!  It does not get better than that, at least not until you add some apricot preserves and a little peanut butter, then wow.  Then she handed me my gifts: four cool t-shirts and Asterios Polyp

by David Mazzucchelli, which is supposed to be one of the most important graphic novel releases of 2009.  One of the shirts was black with the Red Lantern symbol.  I explained that the Red Lanterns were the embodiment of rage in the emotional spectrum.  She replied that she was reminded of the Care Bears.  What?  The Care Bears?!  That is absolutely, positively not accept...oh...wait...you kind of have something there.  Was there a Care Bear that vomited up flaming blood?  I'm not sure.
Day After My Birthday Off From Work - I decided to take the day after my birthday off instead of the actual day, because I figured that Mad Men Tuesday was a good way to kick things off, plus I could drink a little more than usual and not worry about falling asleep in my TPS report on the job.  I basically woke up, wrote some, made whole-wheat pancakes with apricot preserves and peanut butter, watched Iron Man 2

on Blu-Ray, took Tulip for a walk, went downtown to get my comics, worked on the book some more and came home.  I also took an hour long nap, which I never do.  I could get used to days like that.
Morning Glories #2 - Written by Nick Spencer with art by Joe Eisma.  Okay, I should have had this book over two weeks ago, but I forgot to put it on my damn pull list and it sold out.  Thank goodness I went to the Comic Store on Wednesday and grabbed one to the second printings of #2.  I love this book and this is going to be one of those series that has you wondering what the hell is going on, while crying that you have to wait for another month before the next issue is released.  The story concerns six exceptional students who are invited to the Morning Glory Academy where all sorts of odd things begin to occur.  Conflicting personalities, sadistic instructors, and the discovery that their parents have never heard of them before trouble the students.  Things only become more weird and bizarre when they find themselves spending their first day in detention.  Well written and exceptionally mysterious I cannot wait for issue #3 to come out.  *side note - Nick Spencer attended the Comics Experience with Andy Schmidt and has gone on to create quite a name for himself.
Jump into the series and buy these issues...if you can find them.  However, Morning Glories #1 & 2 can be found on Comixology (PC, Mac, iPhone app, iPad app, iTouch app) for $1.99 each.  No excuses, buy them. 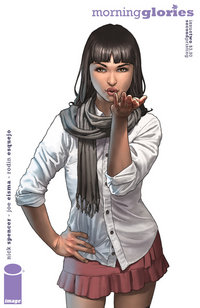 S.H.I.E.L.D. #4 - Written by Jonathan Hickman with art by Dustin Weaver, published by Marvel Comics.  A dense, rich and at times confusing book about the history of the S.H.I.E.L.D. organization focusing on its historical members and their protectorship of Earth.  Galileo, Sir Isaac Newton, Leonardo da Vinci, Nostradamus and others, work to defend from menaces such as the Brood, Galactus and the Celestials.  Fascinating book that needs plenty of room--and issues--to breathe and tell the story properly.  A great book thus far.

- I'm not one for writing music reviews, but I have to say that I love the latest album from Film School.  The addition of more female vocals remind me slightly of some of My Bloody Valentine "Loveless" era songs, and the other tracks are calm and cool or rocking.  I love the song Heart Full of Pentagons.  Check it out and listen to the samples on iTunes or Amazon.com.  Really good.

Slice Into the Woods
Chamber of Commerce Funding Attack Ads With Funding From Big Business and Foreign Corporations -  Wow, just wow.  Bring jobs and production back to the US?  Not if these good ol' boys have anything to say about, and not if these foreign companies have anything to say about it either.  It's pretty distressing that countries outside of the US can try to buy our elections and that Big Business can pursue their agendas without limitation now.  Why are the people allowing this to happen not under investigation?  Let me get this straight...bringing jobs back to America for Americans is not patriotic, but restricting Americans to paying foreign interest for oil, moving jobs out of our country to save a buck or two on a widget (except for the unemployed who lost their jobs and can no longer afford said widget), and allowing foreign interest to dictate domestic policy is what being an American is all about?  Stupid.