Welcome back, Donist World Denizens! For those of you new to our site, I’m Donist, and I am joined by Donist World CFO the Reverse Obie* (my friends’ Boston terrier whose fur recently swapped colors) and by our marketing director/administrative assistant/party planner/anti-corruption hero Tulip (my dog, Reverse Obie’s sister). My puppy executive team and I are off to luxuriate in the hot tub, with some beer and nachos. Anyhow, take a breath, let your shoulders relax, grab a drink (you deserve it…unless that’s not your thing) and see if you can dig up some of those dark chocolate and mint cookies from Trader Joes, sit back, and afterward check out some great comics. Thank you for reading!

You heard me speak on each issue of Silver Surfer: Black as they released. You reeled before the ferocity of my love during the “Donist World 2019 Year-End Roundup! (Part One).” You called the cops on me as I screamed at passerbys from the roof of my two-story building, demanding they rush out and scoop up all-five issues so they too might bask in the glory of the visually-stunning artwork and luxuriate in the cosmically-cool, refreshing waters of the story I revered in our “Favorite Comics of the Past Decade” segment. Now, the birds have fled their roost, the crickets’ voices or rubbing legs or whatever the hell it is they do to make such a terrible racket have been stilled, and that weird guy who’s always lurking in the dry creekbed has up and left and for a dang good reason: I finally received my copy of Silver Surfer: Black Treasury Edition. 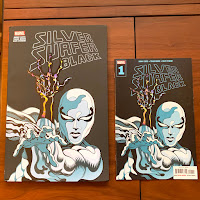 As much as I would love to do a page-by-page, panel-by-panel breakdown of this comic that is so vastly different from what you would normally expect to see from the “House of Ideas,” we’re not going to do that. You already know how much I adore this series. Instead, we are looking at the actual presentation of this particular collection. As wonderful a story as Cates has crafted throughout Silver Surfer: Black, the biggest draw is going to be Moore’s mesmerizing artwork and Stewart’s enchanting and mind-elevating colors. So, why would anyone not want to see this lovely book in a form factor that is much larger than that of the original source material? Here, instead of the standard-sized comic book, we have a superior 8.6" x 13.2" size to better bask in the glory of this book’s beauty (check out the side-by-side comparison of the comic and the collection). The cover is a black matte with a lovely—and expensive—spot varnish on the Silver Surfer on both the front and back. Inside, you get all five issues at a larger size to tantalize your peepers as well as some back matter such as the many alternate covers and a few examples of Moore’s roughs to inks. My only criticism of this must-see, must-own collection is that I would have liked to have seen MUCH more in the way of Moore’s roughs and finals as well as some of Stewart’s colors and possibly some flats without the boundaries of the linework. The inclusion of such additional material would have vaulted this excellent collection from treasury to treasure. Regardless, though, you must get this gorgeous edition into your mitts as soon as possible.
VERY HIGHLY RECOMMENDED!

Oh, my lordy, lordy, lordy, lordy. Lock up your children, Denizens, send you significant other to the nail salon, and make sure your pets are asleep. Throw out the tofu, tell the neighbor kids to get off your damn lawn, and close ALL of the blinds on every window in the dang house. You see, you’re about to read Terror Assaulter: O.M.W.O.T. (One Man War on Terror) and you want to be damn well certain those with delicate sensibilities are not about to see what you are about to behold. Got it? Okay. Let me spell this out for you: NSFW. Yup, NSFW. Holy guacamole this book is so very 100% NSFW. Woooooo! This is NSFW. Alrighty, then…let’s just say I had absolutely no idea what I was getting into when I ordered this 112-page collection. The gist of the story is that George W. Bush created the Terror Assaulters as a response to the events of 9-11, and this book follows the One Man War on Terror as he fights, well, terror. Terror can be in the board room, on a plane, at a mall parking lot…anywhere. The Terror Assaulter will fight and kill anyone who seeks to perpetuate terror and if innocent bystanders get in the way, by golly, that’s just the cost of stopping, you know, terror. The TA also gets busy—and by “gets busy,” I mean goes full-on sex person—with anyone who wishes to express thanks for being saved from—you guessed it—terror (and by anyone, I mean anyone: women, men, and even a former Terror Assaulter who becomes a terrorist and goes to prison and transitions to a woman, and and and). Again, NSFW as these scenes are not even remotely suggestive, they are full-on XXX.
Which brings me to the art.
If you add a dash of Paul Gulacy to a whole heaping helping of an adolescent drawing their own comic that they definitely do not want their parents to find, you get this book. Characters are stiff and occasionally of disproportionate builds, but this is completely by design. Marra knows what he is doing both in the storytelling of the art and when laying down perspective of buildings, tables, plane seating, etc. As a throwback to ’70s comics, he also has many moments when characters tell you exactly what is happening as you see it happening. For instance, a man gets chopped in the neck, and the man says, “you chopped my neck.” In the next panel, the man is holding his throat and says, “‘Choke’ I’m choking.” You get the picture. So, yup, be ready for some intentionally rough dialogue, but that is part of the book’s charm.
Terror Assaulter: O.M.W.O.T. (One Man War on Terror) is the comic you wish you could have made when you were a kid home sick from school. It had sex, it had violence, and it had completely unrealistic action sequences, only here it is done by a grown-ass man who wholeheartedly knows his shit. This book is offensive. It is shocking. I was left speechless. Upon finishing it, I was so thoroughly appalled that I immediately ordered another or Marra’s books (see next). Oh, yeah, again, seriously, NSFW.
VERY HIGHLY RECOMMENDED!

Hot damn, Denizens! Although not XXX rated like Terror Assaulter: O.M.W.O.T. (One Man War on Terror), Night Business is definitely NSFW as well. This is Marra’s love letter to the excesses of ’80s movies and television. It has it all: serial killers, strippers, cops on the edge, drug dealers, T&A, guns, motorcycles, cults, and a hero with both a dark side and a heart of gold with two first names (Johnny Timothy to be exact) who kicks all sorts of ass. That’s right, folks, it’s Night Business (imagine here a breathy ’80s woman with tons of makeup and a pound and a half of Aquanet in her massive hair whispering Night Business as a sax solo pervades the grime-ridden streets). Anyhow, you get a lot more book with this hardcover gem of 240 black and white amazing pages. You also get a mashup of so many different types of ’80s movies that Marra somehow manages to pull together in a cohesive story that is ridiculously fun and well-told. The art is much more polished and detailed than Terror Assaulter while still retaining some of that lovely Gulacy vibe and paying homage to the gritty indie comics of the early ’90s. I loved everything about this beautifully presented collection from the story to the art to the nostalgia trip I’ve been riding for some time now. So, put on some retrowave music, grab yourself a fifth bourbon to serve on the rocks, and settle into one helluva crime comic. Settle in for some…Night Business!
Again, I am so offended by this collection that I am now hunting down my next Marra book, which will probably be American Blood; I can’t wait!
VERY HIGHLY RECOMMENDED!

(Written by Jeff Lemire, illustrated by Dustin Nguyen, lettered and designed by Steve Wands, published by Image Comics)
We finally take a look into Mother’s past and see what made her such a diabolical witch.
VERY HIGHLY RECOMMENDED!

(Written by Donny Cates, illustrated by Nic Klein, colored by Matt Wilson, lettered and designed by VC’s Joe Sabino, published by Marvel Comics)
It’s Thor God of Thunder, King of Asgard, Herald of Galactus versus Beta Ray Bill; it will not be a fair fight but it is definitely a shocking one.
VERY HIGHLY RECOMMENDED!

(Written by Jonathan Hickman, illustrated by Matteo Buffagni, colored by Sunny Gho, lettered by VC’s Clayton Cowles, designed by Tom Muller, published by Marvel Comics)
Mystique is on a secret mission, but can she be trusted and can she trust Xavier and Magneto?
VERY HIGHLY RECOMMENDED!

(Written by Al Ewing; illustrated by Joe Bennett; inked by Ruy José, Belardino Brabo, and Cam Smith; colored by Paul Mounts; lettered by VC’s Cory Petit; secondary story illustrated and colored by Javier Rodríguez with inks by Álvaro López; published by Marvel Comics)
The Hulk takes on the weird, furry, alien monster known as Xemnu (who I am now curious about) and things do not go his way.
VERY HIGHLY RECOMMENDED!

That’s it for this installment, Denizens. Thank you for reading and see you next time!