Welcome back, Donist World Denizens! For those of you new to our site, I’m Donist, and I am joined by Donist World CFO the Reverse Obie* (my friends’ Boston terrier whose fur recently swapped colors) and by our marketing director/administrative assistant/party planner/too much happenin’ all the time Tulip (my dog, Reverse Obie’s sister). Cutting the intro short as we missed last week’s post because of a wedding party up north we had to attend. But my puppy executive team and I are back with monster-sized post! Anyhow, take a breath, let your shoulders relax, grab a refreshing water (or a beer or two) and some kale chips (or delicious tortilla chips and salsa), sit back, and afterward check out some great comics. Thank you for reading!

No doubt, this is the stuff that transcendent comics are made of. From the start, Silver Surfer Black has been a trip and a half from beginning to end in both story and oh-so-gorgeous art. Cates gives us a time-traveling jaunt that sends the Surfer, who is quickly being consumed by poisonous darkness, billions of years into the past where he enlists a young Ego the Living Planet in a desperate battle against Knull, god of the symbiotes. Norrin Radd is even forced to decide whether or not to end the life of an incubating Galactus before he transitions into the devourer of worlds. Without art, this story is an experimental success the likes of which I hope to see much more of from the House of Ideas, but with art…oh…my…stars…and…garters. Moore’s trippadelic imagery—beautifully pushed to heavenly realms by Stewart’s vibrant, flat colors—is what will catch your eye and keep you transfixed for every single stunning page of this tangentially Mike Hinge-esque work. The five-issue miniseries is over, which is 95-issues short of what I wish we could have, but, hey, I will take what I can get. I am definitely excited to get ahold of the Treasury Edition that drops late December, but even this enlarged form factor is not going to be enough for this magnificent, must-own work of art, but I guess a book the size of a door would be a bit unwieldy.
VERY HIGHLY RECOMMENDED!

I’m gonna go ahead and say that I’m already bummed that we’re only going get two of this. At least Ed Piskor’s recent X-Men Grand Design series saw six lovely oversized issues, but the Fantastic Four definitely has a history that is as rich as that of everyone’s favorite mutants. But whatchagonnado. Here, Scioli utilizes a 25-panel grid layout to relay much of the beginnings of not only Marvel’s first family but also Galactus, the Inhumans, Namor, and others from the very early years. Even with smaller-than-you’re-used-to-seeing panels, Scioli delivers a beautiful look that is equal parts a love letter to Kirby and a style that is his own. As for how Scioli intends to wrap up the remaining 40 years of FF history in one 48-page comic is beyond me, but I will 100% be there to see how it goes. My only gripe for this book is that the cool marbled paper was a bit too dark in places, making the art and lettering a little difficult to read. Regardless of my printing quibble, this wonderful experimental comic (Yay, Marvel! Keep it up!) comes…
VERY HIGHLY RECOMMENDED!

A few years ago, Image seemed to put out a monumental new series every other week, but for the last year or so, fewer new titles have grabbed my attention. Undiscovered Country, however, spoke to me. In this world, we step in three decades after the United States literally walled itself off from everyone and ceased all communications. The rest of the world continued on, but all seems lost when a recent deadly plague threatens to kill them all, until the long-dormant US reaches out to offer a cure as well as permission for a select group to come inside its mysterious borders. What could possibly go wrong? The story immediately sucked me in and the storytelling of the art kept me whipping through the pages. Most importantly, this outstanding first issue did its job perfectly: it left me desperate for more more more. Undiscovered Country is the dystopic comic for those who want to torture themselves and who are nervous about the direction our Dumbass-In-Chief and his lackeys seemingly want to drive us toward.
VERY HIGHLY RECOMMENDED!

(Written by Donny Cates, illustrated by Iban Coello, colored by Rain Beredo, lettered by VC’s Clayton Cowles, published by Marvel Comics)
The “Absolute Carnage” event continues as we get a few pages of flashback—for those not buying Absolute Carnage— and some fight stuff that is cool as some heroes faceoff against the symbiote-infected Maker, but the main draw of this issue is the mystery of who and what Dylan actually is. We also finally get to see a bit more of Sleeper, which is exciting. I’m still enjoying the event playing out over these two titles, but I will say that I am eager to see Knull return to cause some havoc.
HIGHLY RECOMMENDED!

(Written by Jason Aaron, illustrated by Mahmud Asrar, colored by Matthew Wilson, lettered by VC’s Travis Lanham, published by Marvel Comics)
We have been teased with the b-story of Conan’s death to appease a death god since the first issue and now we finally begin to see it all play out as the “B” becomes the “A.” The Crimson Witch and her diabolical brood are fairly horrific, especially as Conan battles the evil woman with her head barely affixed to her body by grotesque sinew. Yup, it’s pretty disgusting and I love every panel of it. Aaron and Asrar continue to make Conan the Barbarian a compelling read as heck read.
HIGHLY RECOMMENDED!

(Written by Jeff Lemire, illustrated by Andrea Sorrentino, colored by Jordie Bellaire, lettered by Steve Wands, published by DC Comics)
This is my first DC Black Label comic and I’m not going to ding it for being $5.99 and only 32 pages; some regular issues are still $2.99 (I think) and those have 20 pages each, so…math. Yes, it’s a bigger form factor so you get to see some bigger art and the coverstock is thicker, but the story is going to have to be good to pull me in. Thankfully, it is. I trust the Lemire/Sorrentino team (Green Arrow and Gideon Falls) to deliver and they definitely do so on this first issue in a three-issue miniseries about a psychiatrist who thinks he can cure the Joker. Because of these two creators and the slow-burn, unease they bring to this crime/horror psychological thriller I will see it through to the end and can say it comes…
HIGHLY RECOMMENDED! 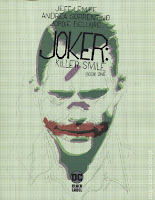 (Written by Grant Morrison, illustrated by Xermanico, colored by Steve Orliff, lettered by Steve Wands, published by DC Comics)
Much like The Green Lantern, which I adore primarily because of Liam Sharp’s glorious art, Morrison’s story leaves me scratching my head often as events jump around and omit possibly cool things like seeing the Blackstars bring Mongul to his knees. Oh well, seeing Paralax and the unnervingly sexy Belzebeth take down a tongue-headed monster will bring me back for the next issue. If you are a fan of The Green Lantern, then you need to jump in on this three-issue miniseries as it is a bridge between the “first season” and “second season” of that weird and visually stunning Green Lantern title.
HIGHLY RECOMMENDED!


(Written by Rick Remender, illustrated by Bengal, lettered by Rus Wooton, edited by Briah Skelly, published by Image Comics)
I think it’s been just over a year since we last saw an issue of Death or Glory but the creators waste little time in bringing us back up to speed as Glory Owen—whose family and friends live “off the grid”—seeks to get her uninsured father into Mexico so he can receive a desperately needed liver transplant. Unfortunately, the organ smugglers who previously “owned” said liver want revenge and send a germaphobe assassin, a luchador death dealer, and two Dutch murder twins after them. Remender’s story is thrilling and Bengal’s art is equally beautiful whether depicting the characters, the vehicles, or the intricate backgrounds. A very welcome return indeed.
HIGHLY RECOMMENDED!

(Everythinged by Matt Wagner, except colored by Brennan Wagner, lettered by Dave Lanphear, published by Dark Horse Comics)
Oh. Dang. I never covered the first issue of this exciting eight-issue series from Donist World Darling Matt Wagner, but let’s briefly correct that by saying if you are a Wagner fan and have previously steeped yourself in the darkest reaches of his Grendelverse, then this title is a no-brainer. Grendel Prime, a deadly cyborg, has headed off into space in an attempt to find a new planet for humanity’s dwindling populace to reestablish itself. Unfortunately, Grendel Prime is the equivalent of using a sledgehammer to hang a picture frame when it comes to building relations with a planet’s current inhabitants. Seeing Wagner bring his creation back into the spotlight with his beautiful linework and designs is a joy. Although this series reads well enough on its own, you’ll be happier if you catch up with Grendel through the four Omnibus editions.
HIGHLY RECOMMENDED!

(Written by Al Ewing, illustrated by Joe Bennett; inked by Ruy Jose, colored by Paul Mounts, lettered by VC’s Cory Petit, published by Marvel Comics)
Hot DANG! That’s what I’m talking about! This dang series, Denizens. I don’t know what’s going on after the cosmic weirdness of the previous issue, but here we have an incredible issue that is all talking and not a single punch is thrown. Heck, Ewing and Bennett made this an amazing issue with the first-page splash where Bruce Banner states to the world what almost happened to him and who was responsible and then states problems brought about by our government and how the Hulk means to set things right, in other words, Hulk Smash the corporations! The Immortal Hulk just keeps getting better and better.
VERY HIGHLY RECOMMENDED!

(Written by Rick Remender, illustrated by Wes Craig, colored by Justin Boyd, lettered by Rus Wooton, edited by Briah Skelly, production by Erika Schnatz, published by Image Comics)
I am definitely still loving this series. This month, Saya is brought back to the school and is labeled a “Rat” which looks to make everyone’s life more difficult. I’m still pissed that the television show was not given the chance it so richly deserved, but we thankfully have this excellent series everyone should be reading. If you are interested in a story about the students who attend a high school for assassins then you should definitely check out the eight trades or the two oversized hardcovers.
HIGHLY RECOMMENDED!

<Phew!> That’s it for this whopper of an installment. Donist needs food. Badly. See you next time. Thank you for reading.