Welcome back, Donist World Denizens! For those of you new to our site, I’m Donist, and I am joined by Donist World CFO the Reverse Obie* (my friends’ Boston terrier whose fur recently swapped colors) and by our marketing director/administrative assistant/crime stopper Tulip. After hearing the news and seeing the video (awesome!) of a longstanding, lying criminal getting arrested at his home for being a longstanding, lying criminal, we thought what better time to return to the crime comic genre. Anyhow, be kind to each other, mind your health and sanity, treat your friends to some tacos (which we can't eat except for the meat and veggies), keep your pets safe, cherish the ones you love, hydrate, and read some great comics. Thank you for reading!

The Scene of the Crime (Part 2)

There are a fair amount of crime comics out there and admittedly, there are only a few that I have actually read, which is something I am in the process of remedying for a “Part 3” and a “Part 4” in the near future. For the past few years I have been riding the wave of great crime Podcasts like The Last Podcast on the Left, Serial, My Favorite Murder, Up and Vanished, and many others, which have led the way to some great television shows. Comics, however, are my first love and crime comics have been around for a good long while and I took notice of them way before the podcasts and television shows re-sparked my interests. As a timely aside, a recent newsletter from none other than Warren Ellis reminded me of the Paradox Press titles from the ‘90s that I never read and I am now plotting a course to collect them all. At the tail end of the “The Scene of the Crime (Part 1),” I teased there was a must-read, must-own series that demands all crime enthusiasts, art lovers, and/or those looking for an introduction to the comic medium to experience, so we open with…

(Everythinged by Darwyn Cooke, originally published in 2009 by IDW Publishing)

There are soooooo many reasons to read this brilliant masterwork from Cooke: Cooke’s oh-so-gorgeous art that was tailor-made for a noir comic; Cooke’s flawless adaptation of Richard Stark’s Parker novels through the storytelling of the art and the placement of the dialogue; the perfectly suited design and production of the actual book from dust jacket, to hardcover material, to form factor, to the simplistic embossing on the cover, to the two-color print job, to the interior lettering, to the interior lead-in design; and the fact that Cooke did everything. The Parker novels were written by Donald Westlake under the pseudonym Richard Stark, who was supposedly quite hesitant to allow his name to be attached to any sort of adaptation, but Cooke’s respect for the work and his willingness to listen to Westlake’s feedback is what garnered the author’s approval. Unfortunately, Westlake died in 2008 before being able to see the first volume. Thankfully, we were blessed with four editions before Cooke’s untimely passing in 2016 at the age of 53. Here are the books in order:


After all of that lead-up, what is the first book about? Well…Parker may very well be the best heist guy there is. He pulls off a robbery, lives off the gains in luxury hotels for as long as he can, and then moves on to the next job. Only this time, he’s betrayed by his woman and double-crossed by his best friend. Unfortunately for those who wronged him…Parker is alive and he wants what’s his. All four of these OGN adaptations are just too damn good to miss. Read while sitting in a smoke-filled room and drinking bourbon on the rocks. 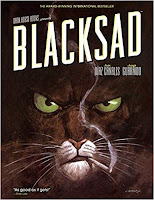 I often hear of people disliking anthropomorphic animal stories, which is so very limiting considering the treasure that is Blacksad. Yes, the main character, private investigator John Blacksad, is a bipedal feline, but by the time you make it to page three you quickly forget that he is a cat, and instead see a man who just found the woman he once loved (another cat) murdered, and who vows make the killer pay. Now, I have a soft spot in my heart for painted comics and Guarnido’s work is nothing short of heavenly. Whether he is capturing all of the drama of a scene through the expressions of animal characters (few can successfully do this, by the way), or showing exactly why Blacksad is so irresistible to the ladies in this book (hint: he’s one helluva tall drink of water, if you get my drift), or showing just how stunningly gorgeous his animal women can be, I promise that you have not seen anything like this book—don’t even get me started on his cityscapes, oh my goodness. Equally strong are the three stories contained in the first volume, which deal not only with murder and crime in ‘50s America, but also with racism and even the “Red Scare” amidst conspiracies and political maneuverings. Once you read the first volume, you best be scrambling to get the other two. Here are the hardcover books you need:


You know you want to jump on these!

In New York City, 1951, America’s television darling, Carlyle White, star of the hit show Satellite Sam, is found dead in a secret flophouse with an impressive assortment of scandalous photographs in his collection. When Carlyle’s rarely-sober son, Mike, explores the room, he begins to suspect foul play and suddenly recognizes one of the women in the stacks of his father’s lascivious photographs. This 15-issue series has a robust cast of characters all brought to life in black and white by Chaykin—including all the lovely women and handsome men you can expect in one of his books—all while providing a fascinating look at the seedy side of the Golden Age of television. Fraction gives fans of Mad Men, crime tales, period pieces, sex scandals, and the television biz all they could hope for in this thrilling and titillating ride. You can read in issues, three trades, or in one glorious hardcover.

Ted Denning and Bob Rainier make up the private detective team Detectives, Inc. In their first appearance, “A Remembrance of Threatening Green,” illustrated by Marshall Rogers, the detectives, whose personal lives are falling apart as their business teeters on the brink of collapse, take a case to help a woman bring her lesbian lover’s killer to justice. In the second volume, “A Terror of Dying Dreams,” printed directly from Gene Colan’s pencils, sees Denning and Rainier investigating a wife-beating millionaire at the behest of a concerned social worker. Both story and art alone make for a fantastic read for crime junkies, but what is equally important is that “A Remembrance of Threatening Green” is the first mass-market comic to feature a lesbian character, and “A Terror of Dying Dreams” is to be commended for dealing with the subject of domestic violence. The sadly short-lived series can also be praised for its take on race relations and abortion in addition to being a straight-up thrilling read. Unfortunately, the publication history is somewhat complex, so here goes:


Now, it looks like I need to put on my detective hat and see if I can actually find if there is indeed a 1985 graphic novel or not.


There you have it, Denizens, enough crime comic reading to keep you busy until the next installment. Happy reading!

Labels: Comics Lust, The Scene of the Crime