Welcome back, Donist World Denizens! For those of you new to our site, I’m Donist, and I am joined by Donist World CFO the Reverse Obie* (my friends’ Boston terrier whose fur recently swapped colors) and by our marketing director/administrative assistant/party planner/vacation maximizer Tulip. It’s been a brutally stressful week, but Friday brought some much needed good news. This coupled with the fact that my puppy executive team and I have this coming week off means we got to get down to some serious chillaxin’. Heck, we might even try giving this thing called “a full night’s sleep” a shot; we’ll see how it goes. We hope you have a great Thanksgiving week. Anyhow, be kind to each other, mind your health and sanity, eat some tacos, keep your pets safe, cherish the ones you love, hydrate, and read some great comics. Thank you for reading!

Excelsior! Cheers to the “The Man” 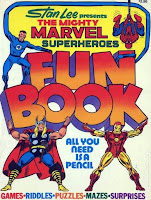 It was probably at some point in my early teens when I began to gravitate more toward creators than characters. Sure, as a young boy, I could point out that the art I loved on a book was not as good as it had been, or when a story just didn’t have that oomph I had been enjoying previously, but I will say this: I sure as hell knew who Stan Lee was by the time I was learning to read. Stan was everywhere. Caricatures of him appeared in my favorite Marvel comics, he showed up in my Marvel activity/puzzle books (Mighty Marvel Superheroes Fun Book), and as the narrator of some of my favorite cartoons (Spider-Man and His Amazing Friends). Then there were those three wonderful words on most covers while I was growing up: “Stan Lee Presents.” All I knew back in those early days was that Stan Lee made my favorite comic books. All of them. I soon realized that there was this guy, Jack Kirby, who was also involved in so many of my favorite books, and then there were other writers and artists, but the thing that persisted was The Man.

Even though Stan created/co-created and wrote/co-wrote many comics before my time, I was still exposed to much of his works through many form factors other than comics. I had comic books reprinted in novel-sized format, regular reprints, massive treasury editions, and so much more. I also had many well-loved and tattered actual comics that had somehow ended up in my collection and that would be worth a pretty penny had I known preserving comics was the way to go. Regardless of the degree, Stan “The Man” Lee was instrumental in bringing about many of the characters I have loved and cherished for 90% of my life. Spider-Man, The Fantastic Four, The Hulk, Daredevil, Black Panther, Iron Man, Thor, Doctor Strange, The X-Men, and so many others were in the comics I read, on my clothes, on my bed sheets, on my puzzles, and featured in my favorite cartoons. His characters made up the bulk of my toys and informed the way I wanted to portray myself to the world. I wanted to be a good guy. I wanted to be like Spidey. This hasn’t changed. 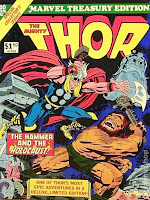 I’m fairly certain my first Stan Lee read was Marvel Treasury Edition #10: The Mighty Thor. This 10” x 14” beast was one of my most prized possessions and I read it often. The book was published in 1975 and reprints Thor #154–157 and featured Stan as the writer and Jack Kirby on art and was pure comics glory. I would build my blanket and TV tray fort, spread out the book, and marvel at the sequentials with my Thor Mego doll “reading” alongside me. I worshipped Thor and my eyes widened at the sight of the Asgardians as they fought the menace of Ulik the troll and my favorite monster for many years, Mangog. Even if the 1,434,572 rereads hadn’t savaged the physical integrity of this book, my dogs made sure its time was nigh after I came home from school to find they had eaten most of my precious oversized comic. I’m pretty sure I cried that day. You can read this story today in Thor Epic Collection: To Wake the Mangog.

Thankfully, The Fantastic Four Pocket Book #1 (published in 1977, and reprinting The Fantastic Four #1–6) arrived at the Acme store and I was able to plead with my mom to buy it for me. Again, this was a brain-melting experience as here was The Fantastic Four I knew and loved, but in a paperback-sized volume and again with the Kirby art I knew so well and the all-too-familiar “Stan Lee Presents” emblazoned on the cover and with him scripting the story. This book had it all: the group’s origin, the Mole Man, monsters, the Sub-Mariner (I called him the Submareener for years), sea monsters, Dr. Doom, and by golly it had my gosh darn heart and soul. I read this with my Fantastic Four Mego dolls and would come to rue the day the book suffered near destruction after I somehow found it soaked with water. I don’t know if I dropped it in the bathtub, or if melted snow got to it. All I know is that when I found the saturated thing, I had the bright idea of placing it atop the heater vent to help dry it out. Yeah, this caused all of the pages to ruffle and warp, making the paper extra brittle and causing the book to be perpetually fanned out. Dang. I loved that book. Today, an easier-on-the-eyes collection called The Fantastic Four Epic Collection: The World’s Greatest Comic Magazine is the way to go.

What I DO have is Marvel Treasury Edition #21: The Fantastic Four (published in 1979, written by Stan Lee, illustrated by John Buscema), which reprints The Fantastic Four #120–123. This is the way you drive a young Donist to madness, a joyful madness, but madness nonetheless. If you mix The Fantastic Four, Galactus, and Silver Surfer into one book and then add a new herald named Air-Walker, who looked like an armored knight with a flaming cape, into the mix, you get a child who could barely contain himself. At least this book survived the move from Ohio to California and decades of reading. It’s beat to hell, but at least I still have it. It’s also signed by Stan Lee from back in 1986…more on that in a sec. Fantastic Four Masterworks Vol. 12 collects these issues, but it might be hard to find.

I’m sure I had other Stan Lee penned books—plenty of them, in fact—but the next one to really stand out to me arrived almost a decade later in 1988 when Stan and Moebius released the two-issue miniseries Silver Surfer: Parable. Now, of course, I knew who Stan was but I also knew of Moebius as I had been titillated by his art in Heavy Metal, with his masterful linework and designs leaving an even longer lasting impression than that of his depictions of lovely women. But here we have the Surfer as written by Stan and art by Moebius. What is there not to love? It doesn’t look like there are any collections in print, so you might have to hunt these down.


Anyhow, one great thing is that my brother and I got to meet Stan back in the 80s when he visited the sadly short-lived Andromeda Books in Goleta. I remember a fair amount of people there waiting to meet The Man, and I remember feeling starstruck for the first time in my life. Here was the person responsible (to varying degrees) for most of my favorite Marvel characters. I had been reading and collecting his work for most of my teenage life, I had seen his face countless times, I knew his voice, and here he was signing our stuff. He was kind, gracious, and seemed every bit as thrilled to be there as we were. Let’s just say it was a good day.


Stan Lee and his (co-)creations impacted my life tremendously. He deepened my love of comics and made me want to be a better person and to expect the same of others (which, sadly, causes me no end of grief in today’s political climate, but whatchagonnado). He lived to the age of 95 and was up until recently having cameo appearances in the movies about many of his characters that continue to thrill untold millions of viewers. He left a massive mark and will continue to leave a mark for ages to come. Rest In Peace, Stan Lee. Excelsior!