Welcome back, Donist World Denizens! For those of you new to our site, I’m Donist, and I am joined by Donist World CFO the Reverse Obie* (my friends’ Boston terrier whose fur recently swapped colors) and by our marketing director/administrative assistant/party planner/pumpkin-spice-is-nice specialist Tulip (my dog, Reverse Obie’s sister). The news continues to be increasingly appalling this week, so let’s escape from the all-too-real horrors and idiocy of this Drumpf world for a bit, and focus on a more fun-filled type of horror: Halloween. Now, my puppy executive team and I have some pumpkin pancakes, iced pumpkin cookies, and an Imperial Pumpkin Porter aged in bourbon barrels waiting for us out on the porch right now as well as some choice reading to get to, so we're going to keep this short. We also have to beg Amy the intern (my wife) to bake some of her famous pumpkin chocolate chip cookies before we head on out. Anyhow, be kind to each other, VOTE!, mind your health and sanity, eat some tacos, keep your pets safe, cherish the ones you love, hydrate, and read some great comics before checking out Daredevil Season 3 on Netflix. Thank you for reading!

Nothing to Fear but Fear Itself…and Comics! (Part 2) 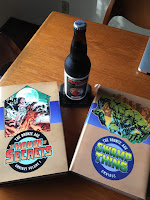 Oh, my goodness gracious, Denizens, when Halloween comes around there’s nothing I want to do more than watch loads of spooky movies, drink and eat pumpkin-flavored everything—can a Donist get a pumpkin chocolate chip ice cream for Pete’s sake?—and read scary as all get out comics. I can already tell you, I have the Donist World Darling The Upturned Stone waiting for my annual reread, and I will finally have a chance to crack open The House of Secrets: Bronze Age Omnibus and Swamp Thing: Bronze Age Omnibus volumes I bought for myself as birthday gifts this year. I also have an ultra-groovy Barrel-Aged Imperial Pumpkin Porter from Epic Brewing just for the occasion, but given the size of these lovely tomes, I suspect the beer (nor I, for that matter) will last long enough to make much of a dent in the reading material, which means the scares will last for a good long while. But for those seeking more digestible chunks of reading, feast your peepers on some of the spine-tingling titles that follow.

Yeah, this one. Criminy. Denizens, if you want to be scared, Wytches is the book you need to read. No joke, no exaggeration, but when I was reading this series in issues, I had to take Tulip outside to go to the bathroom before we went to bed. It was particularly dark that night, windy to the point of rustling the leaves in the trees and obscuring all other sounds of the night. All I could think of as I waited for her to do her business was what lurked out amongst the trees of the nearby woods and if I had actually heard the “Chit. Chit. Chit” intermixed with the rustling of the leaves. Once Tulip finally finished, I sped her back into the house. This is the power of a great horror writer paired with an illustrator and colorist who can bring a terrifying scene to life in a manner that sticks with you. Wytches follows the Rooks family who has recently moved to a small town in NH after a tragic event, but an ancient, dark force of evil watches them from the woods, waiting to tear them asunder. It’s been a couple of years since I read this comic and the creatures, the wytches, still give me the willies with their misshapen forms and terrible powers all brought to life by Jock’s beautiful line work and storytelling and Hollingsworth’s unique coloring effects. You can buy Wytches in trade today, and then pick up the standalone issue Wytches: Bad Egg Halloween Special that will serve as a prequel to the next, eagerly-anticipated story arc. If you have a fear of the woods, the dark, of being watched, of supernatural malice, of being isolated, of having loved ones taken, of anything for that matter, then this is the book that will pull all of those strings. You’ve been warned. Enjoy.

(Everythinged by Terry Moore, originally published in 2011 by Abstract Studio)

Rachel Beck comes back to life in a shallow grave in the woods to discover she has no recollection of how she got there or who killed her. Now, with the help of her friends, Rachel seeks to solve her own murder at what seems to be at the hands of a serial killer. But the sleepy town of Manson has a secret history of nightmares, and even a girl who is beyond Death’s reach might not be ready for them to stand revealed. For those who have read Moore’s masterpiece Strangers in Paradise, Rachel Rising might seem like a huge departure from the type of material fans fell in love with, but it really is not; only the genre has changed. We still get the brilliantly developed characters who you end up loving with all your heart and soul (Aunt Johnny and Jet!), fantastical situations somehow made realistic, moments of sadness mixed with moments of humor, and a compelling story you can’t put down. The main difference is that you also get scenes that are downright unnerving and scary. Rachel Rising ran for 42 issues and although I still believe the series could have benefited from at least another six or more issues to let the conclusion breathe, the ending is indeed satisfying. Luckily, you can read the whole shebang through the seven trades, or the done-in-one omnibus.

Although Rachel Rising and Revival both have a main character who come back to life after being murdered and with no recollection of how either victim died or who killed them, that is where the similarities in the two stories end. Revival tells the story of a rural area in Wisconsin where on one day the dead came back to life. Some of the dead act as if they had never died, others are horribly changed, but for those that seem normal, something is just…not…right. Enter Officer Dana Cypress who has to solve a violent murder in a town under government quarantine where the list of suspects now includes those who were, up until recently, dead. I am only halfway through the trades and I love this series. Revival can be absolutely terrifying—the old lady pulling out her teeth as they quickly grow right back into place—and at the same time touching and humorous as the Cypress sisters deal with each other and their overly-judgemental father. The strange ghosts/aliens/entities that lurk in the woods are unnerving to be sure, but some of the worst monsters in this book are the “normal” humans who seek to profit off of the catastrophe of the dead rising or those looking to cover up their own heinous crimes amidst the chaos. You can catch up on this great series through the eight trades or the four hardcovers.

You already know I’m a huge fan of Lemire’s work, but when you throw in his immensely talented collaborator from the days of Green Arrow, then there’s no way I could pass up their dive into the horror genre. Thank goodness I got in on the ground floor of what reminds me of a comic book take on the vibe of the old Twin Peaks television show. In Gideon Falls, The Black Barn has appeared and quickly disappeared throughout history, leaving a trail of death and madness in its wake. Few, however, know of its existence. The story follows two men: Father Fred, a Catholic priest who moves far too often, is sent to replace the previous priest whose death might not be what it seems; and Norton, a mentally disturbed individual, compelled to pick through trash to find splinters of the mysterious Black Barn which suddenly appears to Norton’s psychiatrist. Gideon Falls has its roots more in the psychological side of horror as opposed to that of monsters and ghosts, which is what makes it so damn compelling. The threat in Gideon Falls isn’t a werewolf or zombie out terrorizing the streets, but might rather be something far less tangible and might very well be one’s own mind seeking to destroy them. The crazy thing is that Lemire and Sorrentino take us briefly into The Black Barn in the first six issues, and trust me when I say the experience is…unsettling, but beautifully rendered by a stylistic shift in Sorrentino’s art that needs to be seen to be believed. This one is already set to become a television show after a studio bidding war and for good reason: it’s an excellent and haunting series. You can get in on the ground floor with the first trade today.

For some reason, I resisted picking up this series, but after countless reviews and many recommendations, I finally gave it a chance with the first trade; it only took about 10 pages to know I was in for the long haul. Manifest Destiny follows Lewis and Clark as they explore the untamed American frontier in service to their country, but with the secret mission of cataloging the various supernatural elements they encounter along the way. They are accompanied by soldiers, criminals, and the pregnant but deadly Sacagawea as they come across horror after horror, while towering, ominous arches loom where the nightmares are the worst. The characters are complex and realistic with the “heroes” at times acting disturbingly non-heroic and a steady procession of monsters keeps the story thrilling from beginning to end. I cannot properly state how much I love this series and how even though I just finished reading the sixth trade, I’m preparing for a grand reread from one through six to bide my time until the next exciting chapter drops.


That’s it, Denizens. Get yourselves some creepy material that will keep you up all night, while loving every second you spend in these terrifying worlds. Have a great Halloween.

Labels: Comics Lust, Nothing to Fear