Welcome back, Donist World Denizens! For those of you new to our site, I’m Donist, and I am joined by Donist World CFO the Reverse Obie* (my friends’ Boston terrier whose fur recently swapped colors) and by our marketing director/administrative assistant/party planner/floatation device drifter Tulip (my dog, Reverse Obie’s sister). Greetings, Denizens. And we’re back! From vacation that is. Amy the Intern (my wife), Tulip, and I just got back from a few relaxing days up (way up!) at Lake Arrowhead. While there we ate, read, chilled, read, hiked, and read some more. It was a much-needed break. Reverse Obie stuck around the corporate office (Mom’s basement) to review our trajectory at maintaining our status as a Fortune 320,000 company and in order to binge watch episodes of the Netflix show Aggretsuko, which is a short, animated series that I relate to waaaaayyyy too much. It’s essentially about a cute, soft-spoken, red panda woman whose workplace and life frustrations drive her to levels of frustration that can only be dealt with by singing death metal at a karaoke bar. Wait...what exactly is Reverse Obie trying to tell me? Anyhow, be kind to each other, mind your health, keep your pets safe, cherish the ones you love, hydrate, and read some great comics. Thank you for reading!

Comics by the Poolside (Part 2)


Summer is rapidly coming to an end, which means the days of chilling on the beach and drinking tropical blended drinks you would never dream of consuming back home are also about to end. A return to the job and the unfathomable depths of your full inbox looms ahead as does back to school madness for the kids. Thankfully, we have a bridge, a crutch, a lending hand to ease us through this impending transition. We have a bank of carefree comic book reading by the poolside to carry us along. Great comics saved for just such a time that there were no distractions and we can escape from our escape into exciting new worlds. Here are some great comics to read whether you are on vacation or not. 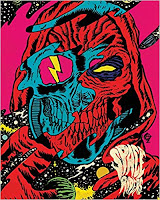 Talk about timing. Last year, Amy the Intern (my wife), Tulip, and I all went on vacation to Lake Arrowhead where we stayed at the lovely Pine Rose Cabins. It was there by the poolside that I first experienced the mind-bending, psychedelic, sci-fi glory of Space Riders, Volume 1. Now, just over a year later, and again at the Pine Rose Cabins, by the same swimming pool, I returned to the cosmos to follow Capitan Peligro and his crew of Yara (female robot), Mono (brutal yet enlightened baboon warrior), and Doña Barbara (lovely, mysterious, green-skinned sorceress) aboard the great skull ship the Santa Muerte. This time, the Space Riders have an evil god of destruction to stop and a whole mess of old foes and ne’er-do-wells stand in their way; thankfully, Capitan Peligro has some unexpected help on his side. Gorgeous, trippy art and colors and a no-nonsense story continues to make Space Riders one of the most fun comics I have read in ages. The creators even go all out on the design of the book with a beautiful matte cover, interior pages that look artificially worn, and a color palette that is a mix of Bronze Age comics and ’70s black light posters. All that and you even get a damn space squid to make this series one of my most prized collections. Grab yourself another cold one, and make sure the unicorn pool toy is fully inflated as we embark on this groovy adventure.

(Written by Donny Cates, Nick Spencer, and others; illustrated by Nino Henrichon, Rod Reis, Symon Kudranski, and others; published in 2018 by Marvel Comics)

As you might recall from “Comics by the Poolside (Part 1),” we all went on a quick vacation back in July to Ojai where I read Doctor Strange: God of Magic and absolutely loved it despite not having read a Doctor Strange comic for years. Hot off the heels of that exciting chapter where Strange is pitted against the new Sorcerer Supreme, Loki, comes the thrilling Doctor Strange: Damnation. In this substantial collection, which I also read at the Pine Rose Cabins, sees Strange attempt to set things right after some sort of Marvel event that I never read; turns out you don’t have to have read the event to understand what is happening here. Of course, everything goes wrong and Mephisto now resides in Las Vegas and it is up to Wong to gather a group of heroes who have transcended death to save the day. Ghost Rider, Iron Fist, Moon Knight, Man-Thing, Brother Voodoo, Blade, Elsa Bloodstone, and ghost dog Bats set out to rescue Strange and stop Mephisto…after they fight their way through demonically possessed citizens and the mightiest of corrupted Avengers. The book is a blast from beginning to end…provided you know the correct reading order, which Marvel confusingly attempts to give you on the indecipherable “Reading Chronology.” Why is this a problem? Well, instead of printing the issues in chronological order, Marvel instead opted to give us Doctor Strange: Damnation #1–4, then Doctor Strange #386–389, then Damnation: Johnny Blaze - Ghost Rider #1, then Iron Fist #78–80, and finally Ben Reilly: Scarlet Spider #15–17. Why not put them in the proper reading order so you don’t have to flip around and possibly spoil things, and instead leave me to research online the proper reading order?! No idea, but to help a Denizen out, here is the recommended reading order of things for you:

Don’t let the reading order stuff dissuade you from reading this exciting mini event. Although some chapters are stronger than others—Doctor Strange continues to be amazing, and Iron Fist is fun, too—on a whole Damnation is damn worth your time and money. Best reapply the sunscreen, things are heatin’ up.

It might be hard for some of you to understand, and you might not believe what I am about to say, but sometimes I make mistakes. I know, I know, it’s true and it happens on very rare occasions. The mistake I made a bunch of years ago was not continuing on with Lemire and Sorrentino’s entire run on Green Arrow. Now, after reading through this must-read collection, I am well aware of the error I made, but I am thankful for getting a chance to hammer through the whole shebang in one fell swoop. My goodness, this book is fantastic in writing, in art, and ultimately for new and old fans of the Green Arrow character. This massive collection contains the New 52 Green Arrow #17–34 as well as a bunch of extra one-shots. You definitely do not need to have read issues 0–17, to follow this story and like me, you can dive right in with this single volume. Here, a deadly archer known as Komodo effortlessly takes everything away from Oliver Queen and the emerald archer is forced to find new allies and to try to find a way to beat a seemingly unbeatable adversary. Oliver’s journey will lead him to life-changing discoveries, devastating conflicts, and ultimately back to the island that made him the hero he is today...among other things. With so many twists and turns and so many jaw-dropping visuals and fight scenes from Sorrentino, you will definitely need to cool off in the pool once you finish reading this hot potato.

Hey, not everything you read by the poolside needs to be new to you. Sometimes you want to read something familiar, something you haven’t experienced for a good long while. That was the case for Thor, God of Thunder. Aaron’s run on Thor is nothing short of epic, and with the cosmic glory that is Ribic and Svorcina’s art, Thor’s battle with Gorr the God Butcher throughout the ages comes across as one of his most unnerving and insurmountable challenges the god of thunder has had to face to date. Although I re-started my journey with Thor while sitting around the pool, I sadly had to leave before finishing and have since taken up the rest of the final chapter (volume 2, Thor, God of Thunder: Godbomb) at the next best place: on the porch while drinking a beer. Hey, sometimes the swimming pool is just gonna have to exist in your mind and a suitable place of peace will have to take its place. Regardless of where you are physically, ALL of Aaron’s Thor books will get you where you need to be mentally.

I also read this one on the porch, and can happily say it was the perfect environment. This hefty collection contains Legion of Super-heroes #122–125, Legion of Super-Heroes Secret Files #2, and Legionnaires #78–81. Now, if you haven’t read the loads of stuff that came before this, I can bring you up to speed by saying that...yeah, no idea, I got nuthin. Although I was a pretty big fan of the Legion throughout the ’80s, I dropped off for a decade or two and I’m only now coming back to the team, all because of Abnett and Lanning. I’m so glad I did. Sure, there are a bunch of characters I had never seen before, but the creators do a great job of both bringing you up to speed and just going with the flow and expecting you to catch up; it wasn’t that difficult to get into the swing of things at all. Here, the Legion faces off against the dreaded, highly-advanced Blight, beings that spread across vast distances of space to take and absorb and convert all into Blight. But can the great heroes of the 30th century stop the very creatures that are rapidly converting the Legion ranks into Blight pawns? Let’s just say their odds aren’t great. This is epic sci-fi space opera at its best, Denizens. When you’re done with this chapter, be sure to pick up The Legion, Volume 2, which I read before the first volume and that covers the fantastic Legion Lost #1–12. If you take a dunk underwater, it’s almost like you are sailing amongst the stars with your very own Legion flight ring...almost.


That’s it for this installment. Now get back to the grind!

I'm out of time as usual and need to get back to the pool. Here's what I have read thus far:
See you next time!