Welcome back, Donist World Denizens! For those of you new to our site, I’m Donist, and I am joined by Donist World CFO the Reverse Obie* (my friends’ Boston terrier whose fur recently swapped colors) and by our marketing director/administrative assistant/party planner/fellow mourner Tulip (my dog, Reverse Obie’s sister). No goofy intro this week. My uncle, Gordon, died last night from cancer complications. By the time it had been detected in late 2017, it was too far advanced, but he chose to fight it anyways. Sadly, the cancer won. He was a good, kind, and well-loved man, and I am happy we were able to reconnect over the past few years. Rest in peace, Gordon. So, be kind to each other, mind your health, keep your pets safe, cherish the ones you love, hydrate, and read some great comics. Thank you for reading!

Hello, class, and welcome to “Thanos 101,” a 300-week course exploring everything that is the Mad Titan Thanos. We will discover everything from his humble beginnings as a Death-obsessed toddler, to his awkward teens, to his first time behind the wheel of a helicopter (don’t ask, #NotMyThanos), to his rebellious “hippy” phase in college, to his coming full circle to become the notorious Death-obsessed adult he is today. We will learn his likes (walks on the beach with his honey, Mistress Death), dislikes (pushy superheroes who don’t want to be killed by him), and pet peeves (again, pushy superheroes who don’t want to be killed by him). Please pull your syllabus from your Trapper Keeper and let’s take a look at the required reading list from writer/artist extraordinaire Jim Starlin. This list—in order of original release—will more than prepare you for the Avengers: Infinity War film that releases April 23, 2018. Best get studyin’, Denizens.

(Primarily written and illustrated by Jim Starlin, published by Marvel Comics in 2013)
If you really want to go deep on the villainous Thanos and can only pick up one book, then this is the one to buy. At 472 pages, you get his first appearance (from back in 1973), Drax the Destroyer’s first appearance, a crucial revamp of the character Adam Warlock that made him one of my all-time favorite Marvel characters, plenty of Captain Marvel, the Cosmic Cube, Infinity Stones, and of course the Avengers and Spider-Man. This is it. This is the big kahuna. With the stories written by Starlin and/or featuring his gorgeous, trippy art, you’ll definitely want to start here.

The Death of Captain Marvel

(Written and illustrated by Jim Starlin, originally published by Marvel Comics in 1982)
The title says it all and picks up roughly five years after the harrowing events of Marvel Two-in-One Annual #2 (included in Avengers Versus Thanos). Captain Marvel is dying and as his friends and colleagues come to say their farewells, he receives a visit from his greatest foe. This is the first Marvel Graphic Novel and also one of the best. Beautifully told, beautifully illustrated, heavy yet uplifting,  the original Marvel Graphic Novel edition is going to be difficult to come by, but at least you can easily catch up with this story and some extra issues in the recently collected Captain Marvel: The Death of Captain Marvel. 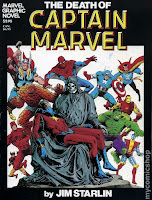 (Written by Jim Starlin, illustrated by Ron Lim, published by Marvel Comics 2013)
The event that comes next is major, but the lead up to that six-issue miniseries began in the pages of The Silver Surfer, where Thanos returns to the land of the living with a new plot to win the love of Mistress Death. These issues then lead into the amazing prelude, The Thanos Quest, which was originally published as two double-sized issues and follows Thanos as he seeks out the powerful Soul Gems. This book has it all.

(Written by Jim Starlin, illustrated by George Perez and Ron Lim, originally published by Marvel Comics in 1991)
The Infinity Gauntlet is my favorite event comic of all time. You have Starlin writing and Thanos and Warlock back among the living following the events that had been building in the pages of The Silver Surfer and The Thanos Quest. Thanos is now in possession of the Soul Gems—he calls them Infinity Gems—and affixes them to his gauntlet becoming an unstoppable God bent on destroying everything to garner the love and attention of Mistress Death. It’s up to Earth’s mightiest heroes to do the impossible and stop him, but they will need the help of a certain golden-skinned hero long thought dead. You’ll want the trade collection for sure.

(Written by Jim Starlin, illustrated by Ron Lim, originally published by Marvel Comics in 1992)
Quickly following on the massive success of The Infinity Gauntlet, a new threat arises that will force Adam Warlock to look to some unconventional means for help. This series is where Marvel started going a little nuts with the tie-in issues that touched practically every Marvel title at the time and which you do not need to read to enjoy this six-issue miniseries. There was also Warlock and the Infinity Watch for those completionists out there, but that series served more to enhance the saga than to be a critical part of it. Although surpassing the grandeur of The Infinity Gauntlet is something I don’t think will ever happen, The Infinity War is still a heck of a lot of fun and is a must-read book that is easily found in collected form.

(Written by Jim Starlin, illustrated by Ron Lim, originally published by Marvel Comics in 1993)
Hey, might as well try to let lightning strike thrice with the conclusion of the Infinity “trilogy.” Marvel released this six-issue miniseries as well as The Warlock Chronicles along with a deluge of tie-in comics spread across the entire Marvel Universe to such a ridiculous degree that I almost bounced from the event out of irritation; I held in and I’m glad I did. Although not as strong an entry as the first two chapters, you should still read the two-volume The Infinity Crusade set, as it has some great cosmic action and thrills.

(Written and illustrated by Jim Starlin, originally published by Marvel Comics in 2002)
Warlock gathers a group of heroes to combat a menace so terrible that he must seek the aid of the dreaded Thanos of Titan himself. This series was released as a biweekly, six-issue series and it succeeded in bringing Warlock and Thanos back to glory and away from company money-grab marketing schemes. If The Infinity Crusade didn’t wow you as much as the previous books, then The Infinity Abyss will get you back to where you need to be.

(Written and illustrated by Jim Starlin, originally published by Marvel Comics in 2003)
Warlock, Thanos, and a host of heroes face the newest mad god on the block, one that threatens to erase everyone and everything from reality. Another strong showing from Starlin both in the story and in the visually stunning art. Like everything else that follows, you’re going to want to pick this up. Excelsior!

Well, that’s the bell, class, and it looks like we’ve just barely made it halfway through the coming week’s reading homework. We’ll just have to pick up where we left off next time, as there are plenty more Starlin Thanos books you need to check out. Until then, best get to reading.

I’m drained, so let’s wrap this up with a quick rundown of this week’s books: