Welcome back, Donist World Denizens! For those of you new to our site, I’m Donist, and I am joined by Donist World CFO the Reverse Obie* (my friends’ Boston terrier whose fur recently swapped colors) and by our marketing director / administrative assistant / party planner / pooch with adamantium claws Tulip (my dog, Reverse Obie’s sister). Alright, dagnabit, now I’m getting all worked up about seeing Logan in the theater this weekend. To do that, though, I’m going to have to load up on cough drops to counter this dang cough that has been plaguing me for the past two months — bronchitis sucks, Denizens. Anyhow, as always, both Tulip and Reverse Obie have been walking around the Donist World corporate office (Mom’s basement) muttering, “Snikt,” and nodding at each other knowingly with smiles on their faces. <sigh> They should know by now that dogs, even executives from a Fortune 320,000 company, are simply not allowed in movie theaters. Crud, I’ll probably cue up Deadpool or something to distract them and then say I’m off to go pick up more beer…we’ll all enjoy Logan together when it comes to video. Some day, after we’ve hit it big, we’ll buy our own dang theater where they will have their own plush balcony area to watch all the dang superhero movies they can handle. But until then, stay positive, have a beer or a strong ginger ale, RESIST the evil of #45, take care of yourself, and while you’re at it check out some great comics. Thank you for reading!

Written by Mark Russell, illustrated by Steve Pugh, colored by Chris Chuckry, lettered by Dave Sharpe, published by DC Comics. You already know I adore The Flintstones, right? I’ve even gone so far as to say it’s one of the most important comics currently being published. The Flintstones…yeah, I know, I never thought I’d ever say that. But Russell and Pugh have given us a deeper glimpse into the world of Bedrock than the animation series ever did. Although set in the Stone Age — albeit a Stone Age where dinosaurs, wooly mammoths, and cavepeople coexist — the series is a social commentary of our modern times. It’s a satire of capitalism, consumerism, religion, war, politics, bullying, tourism, homosexuality, marriage, and pretty much anything else. At no point, however, do you ever feel lectured to, mostly because the series is so dang entertaining. Pugh’s lovely art — especially on Wilma and Betty — will make you smile just as much as the oh-so-smart writing and numerous sight gags. It bums me out that we only have three more issues of The Flintstones before Russell’s run on this important and timely comic comes to an end. Thank goodness Snagglepuss will start soon after, and there’s always the hope we’ll get those final six issues of Prez we’re all so desperate to see. If you missed the first six issues, a spiffy trade comes out in the next couple of weeks. Get it! VERY HIGHLY RECOMMENDED!

Written by Brian K. Vaughan, illustrated by Cliff Chiang, colored by Matt Wilson, lettered and designed by Jared K. Fletcher, color flats by Dee Cunniffe, published by Image comics. I have to start by saying that I love this arc’s covers. They are stunningly beautiful, primarily because of Wilson’s otherworldly colors. Not a hint of black to be found, but rather deep knockouts define the necessary lines, leaving primarily flat analogous colors with a glorious accent to dazzle the eyes…<hmmmmm> Anyhow, where were we. Oh, yeah…you know the drill: Vaughan, Chiang, Wilson, paper girls from the ’80s trapped in the past after traveling back from the future, monsters, weirdos, and all sorts of madness. To tell the truth, I still don’t really know what’s going on, and you know what? I don’t really care. I’m just having a heck of a time enjoying the ride. Back in the first issue, I became attached to Erin, KJ, Mac, and Tiffany, and twelve issues in I adore them all the more. You need to read this comic if you: a) love Vaughan’s writing, b) love Chiang’s gorgeous art, c) love Wilson’s stunning analogous color schemes, d) love well-crafted and beautifully told stories, or e) all of the above. I’m sure by now you know what I choose. VERY HIGHLY RECOMMENDED!

The Stuff of Legend, Volume V: A Call to Arms #1 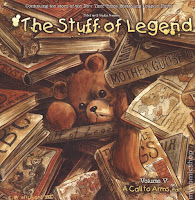 Written by Mike Raicht and Brian Smith, illustrated by Charles Paul Wilson III, designed and colored by Jon Conkling and Michael DeVito, published by Th3rd World Studios. Okay, I first need to let the Boogeyman out of the closet by saying that it’s been almost four years since we last saw an issue of this Donist World Darling, and I will say that The Stuff of Legend has been sorely missed. I also have to say I don’t remember much of anything that went down in the last arc, either. Now, with that out of the way, I’m happy to tell ya I still love this dang comic. The Stuff of Legend, for those of you new to the series, is a tale set in the ’40s, where the actual Boogeyman emerges from the closet to abduct a young boy. The toys left behind come to life and venture forth into the realm known as The Dark to save their boy from the clutches of the fiend. This is not a cutesy book, Denizens. It is a dire tale with real stakes. Characters die, and horrible things happen to them, but as harsh and as shocking as things can be, I can never look away from this beautifully-illustrated, highly-imaginative treasure of a comic. In case I’m not being clear, this is not a book to be read to the wee little ones at beddy-bye time…unless you actually want to scare the bejesus out of them. You also don’t want to start with this issue if you are new to the series. Instead, pick up the first two hardcovers, or go for the first four trades and start from the glorious beginning. Although I still don’t remember the entire cast of characters, and I definitely liked the thicker stock of paper used on previous issues (I know, it’s more costly), I am thrilled to see The Stuff of Legend coming out once again, and more than anything, I want to reread from the beginning to become reacquainted with one of my favorite comic series of the past ten years. VERY HIGHLY RECOMMENDED!

Everythinged by Jeff Lemire, lettered by Steve Wands, published by Image Comics. Amy the intern, my wife, contacted me on New Comic Book Wednesday saying that she was downtown and wanted to know if I wanted her to pick up my comics for me. Love, Denizens, love. Then she sent me a text asking if I wanted something called Royal City, which was not on my pull. I said, “No,” thinking it was something else, but thankfully she texted to tell me it was by Jeff Lemire; my “no” changed to a definitive “yes.” Dang, I’m so glad she clarified. Lemire and Dustin Nguyen’s Descender is my favorite comic on the stands, and I have been a fan of much of Lemire’s great body of work for some time now: Essex County, The Underwater Welder, Sweet Tooth, and many other great comics. Royal City, with but one double-sized issue, already looks to join those treasured books. Now, to be fair, I can’t really say much about the book as that will spoil one of the main components of the story. What I can say is that if you are looking solely for sci-fi, fantasy, horror, superheroes, or magic, then you aren’t going to find any of that here. This story is more of a family drama / slice-of-life tale of a family with a troubled past that resurfaces after a tragic event. Sorry, but that’s all I can give you on the details. If you need a little more clarity, then if you watched the Netflix series Bloodlines, then that is a close representation of Royal City’s tone. You can expect situations to be uncomfortable, troubling, and I’m willing to bet at some point in the next few issues we might be fighting back some tears…and losing that battle. Lemire is a master of emotional storytelling whether his characters are in outer space, traipsing across a post-apocalyptic landscape, or, in Royal City’s case, firmly planted right here on planet Earth. This is a great introductory issue for a series that only looks to get better as more pieces in this troubled family’s past fall into place. VERY HIGHLY RECOMMENDED!

Slice into the Woods

Jeff Sessions, The GOP, and Their Man #45 - At least Sessions recused himself from the #45 Russian ties probe, but that’s not enough. This lying, backward-thinking racist needs to be removed from his position, every bit as much as everyone compromised by Russian influence, including ol’ #45.