Welcome back, Donist World Denizens! For those of you new to our site, I’m Donist, and I am joined by Donist World CFO the Reverse Obie* (my friends’ Boston terrier whose fur recently swapped colors) and by our marketing director / administrative assistant / party planner / chief officer of worrying about the future of our country Tulip (my dog, Reverse Obie’s sister). We’re keeping the intro short this week as we mourn the death of decency, intelligence, and compassion in our country, but more on that at the end of the post. So, pour yourself a pumpkin drink, or a Stone Brewing Xocoveza (or a coffee, if beer ain’t your thang), go see Doctor Strange (we’re finally seeing it today), read some great comics, and most all be ready to fight for what’s right through what looks to be some dark times ahead. Take care. Thank you for reading!

Written by Greg Rucka, illustrated by Nicola Scott, colored Romulo Fajardo Jr., lettered by Jodi Wynne, published by DC Comics. Dang, now this is a “Washington outsider” I would like to see running our country. Strong, smart, decisive, looking out for everyone — and I mean everyone, but whatchagonnado? Anyhow, we are once again gazing into Wonder Woman’s past — even-numbered issues are flashbacks, remember — as Barbara Ann, Steve Trevor, and Etta Candy take Diana to the mall to give the Amazonian a sense of what people are about. It is utterly charming to see Diana marvel at the people, the children, the stores, the food…and sadly the more negative aspects of civilization. Needless to say, it is a time of learning for everyone. Rucka and Scott brilliantly show Wonder Woman’s wonder at this strange, new world while revealing to all, including herself, the hero she is meant to be. I smiled, laughed, gasped, and cheered with this issue. If you haven’t been reading this exciting yet charming series, then you can catch up with the present-day events come February 2017 with the first trade; the second trade looking at her past should follow soon after. VERY HIGHLY RECOMMENDED!

Written by Scott Snyder, illustrated by John Romita Jr. and Declan Shalvey, inked by Danny Miki, colored by Dean White and Jordie Bellaire, lettered by Steve Wands, published by DC Comics. All Star Batman continues to be a thrilling roller coaster ride of an adventure as he battles not just Two-Face but what looks to be a fair chunk of the caped crusader’s rogues gallery as well. Snyder, of course, depicts Two-Face as an insane villain every bit as big of a threat as the Joker, and this “The Beast” character is kind of terrifying, too. Romita Jr. and White’s art is positively stunning, with grand storytelling and exciting sequences. The one thing that leaves me scratching my head, however, is the backup story, which although beautifully illustrated is somewhat confusing, almost as if each installment needed a handful of extra pages to give the story a bit more room to breath. That said, I still enjoyed reading the book as a whole, and if you’re a Batman bat-fan, then I suspect you will, too. RECOMMENDED!

Written by Brian K. Vaughan, illustrated by Marcos Martin, colored by Muntsa Vicente, published by Panel Syndicate. Crud, Denizens. I don’t believe I talked about the first issue of the digital-only-yet-completely-creator-owned Barrier. That is a huge mistake on my part. At its core, Barrier is about an English-speaking woman and a Spanish-speaking man being abducted by aliens and having to work through the language barrier in order to survive. This is a Vaughan-written comic, so I’m sure there are multiple levels of thematic barriers in the story, but we’re only two issues in — and what fantastic issues they are. The art is beautiful, and you simply have to see Martin’s depiction of the aliens and their ship to fully understand the heavenly reaches this artist is taking us toward. Also, the best part about Panel Syndicate comics is that they have a pay-what-you-want-including-nothing for each issue price structure. That’s right, Denizens, you can get everything offered on their site for free, but don’t do that. The groovy thing about Panel Syndicate is that outside of website fees and data storage, the creators keep all of the money they receive. No middlemen, no advertising, no shareholders, no corporate interests. Your donations go straight to them so they can continue bringing us phenomenal stories. I suggest downloading the first issue for free, reading it, loving it, and retroactively giving them money for that issue and giving them what you can going forward. I gave them $3. On that note…You read The Private Eye, right? It, too, is amazing (you can get it digitally or in lovely hardcover), and it is also by Vaughan and Martin and very much worthy of your time. Dang, I can’t wait to see what happens in the next exciting issue of Barrier! VERY HIGHLY RECOMMENDED! 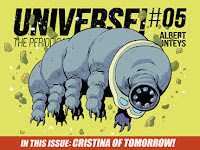 Everythinged by Albert Monteys, published by Panel Syndicate. Okay, the wait between issues of this fantastic sci-fi, digital-only series is kind of lengthy, but what do you expect when each issue is created by only one person; it’s also 48-pages long. For comics books of this caliber, I am happy to wait, just so long as they keep ’em a comin’. The cool thing about Universe! is that each issue can be read as a standalone, but they are also interconnected in subtle ways. For instance, the events of this issue start before the events of the first issue…that is unless you count the leaps back and forward through time, at which point my brain begins to hurt; just go with the flow. You also never know what sort of mental state you will be in by the time you finish each glorious issue. You might still be smiling from laughing through the whole read, you might be a little angry with certain situations, you might be awestruck, you might be heartbroken. Without spoiling anything, this is one of the “heavier” stories, but regardless of how tense situations get, there’s no way you’ll be able to set the story down (assuming you’re reading on a tablet like me). <sigh> Whoa, Denizens, just whoa. If you are a fan of sci-fi, then you cannot live a day longer without Montey’s brilliant series. A rock-solid story, gorgeous cartooning, vibrant and lively colors, there is absolutely nothing negative for me to say about this great series other than I wish it came out weekly; time travel might help with this. Again, this is Panel Syndicate, so pay what you want. I gave Monteys $4, and sincerely hope everyone kicks down as much as they are able so we can continue to get truly beautiful stories such as this for a long time to come. VERY HIGHLY RECOMMENDED!


Slice into the Woods

America lost this week. Donald “Trump” Drumpf won the electoral vote and as such is our next president, which is devastating news for this country. Here we have a man with no experience in politics, no experience in running a country, and a history of failed businesses. He is a confirmed misogynist, a confirmed racist, a confirmed anti-Semite, a confirmed opponent of immigration. He is a man who has repeatedly failed to meet agreed-upon conditions of his business contracts, he does not believe in global warming and as such does not believe in science, he wants to dismantle the EPA and the affordable care act—anti-nature, anti-healthcare for all. He championed the completely false “Birther” movement, he has been caught in countless lies, he advocates for violence against both journalists and free speech — just watch the videos, they’re not hard to find — a violation of the first amendment. He instructed his adoring masses to intimidate voters, which is a violation of the 15th amendment, and subsequently received court orders forbidding such behavior, he instigated violence against those who disagree with him on numerous occasions. He criticized the family of a slain US soldier who happened to be Muslim, he has some shady dealings with Russia, he sexually assaulted and belittled numerous women and boasted about it. He has used the “N-word” repeatedly, and by “N-word” I mean nukes, and the list goes on. So, this is the type of person some people — not a majority, mind you — wanted to run our country. It boggles my mind as to the extremes some people are willing to go to in order to vote against their own best interests.

I, of course, went through all the stages of grief before taking a moment to really think about what might have brought people to this point; surely there must be some sort of common ground between us. I, too, hate modern politics. I lean left but see corruption on both parties. I want big business out of politics. I want to stop sending jobs overseas. I’m sick of paying high taxes. And thus ends my common ground with Trump voters. That said, I would not hire a doctor of philosophy to be my medical doctor for an appendectomy, and as such would never vote for someone whose only proposed qualification for being President of the United States is that he’s been president of many companies…many, many failed ones at that. Sadly, many Trump supporters, the Deplorables, voted for him because he “thinks like they do,” which leads back to anti-immigrant, anti-Muslim, anti-Semitic, anti-black, anti-criticism, anti-free speech, misogynistic, etc. lines of thinking.

The thing is, Trump voters, he’s not like you. Not at all. Did you start the rat race born already across the finish line? He did. He inherited his father’s business and an undetermined amount of wealth. Unfortunately, we all have to scramble and claw our way to the starting point to even start the ol’ rat race, let alone hope to finish it. Also, if you truly believe he is so much like you, show up at one of his many residences to talk with him. Do you think you’ll be welcomed into his home? Seriously? I’ll bet you get “roughed up” like those protestors and journalists. For fuck’s sake, Deplorables, he actually said, “I love the poorly-educated,” is that reassuring to you? Think about it. You served your purpose. He doesn’t need you anymore. See how he looks out for you now.

I could go on for days about this, but I’m starting to get depressed again. I wanted Bernie. That didn’t happen. I wanted the second best choice, the one with actual fucking experience handling the affairs of the country — even when considering Benghazi and private email servers — but thanks to the electoral college and protest / third party voters the one who received the most votes lost. The lunatic is not just running the asylum, he, with his exceptionally tiny hands, will soon be running our country.