(Sung to the tune of OMD's "Dreaming")
So you want to find heaven child
C'mon now, what the hell?
Have you read Rachel Rising, Cuz?
Moore does the scary well
Another kickass comic?
You got it with The Sixth Gun
Its a bag of spooky awesomeness
By Hurtt and Cullen Bunn
No you are not dreaming
There's great comics to catch your eye
Morrison's got a sweet one called Happy!
Donist would never lie 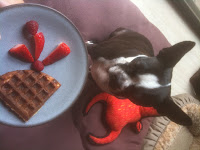 If I had some party hats, I'd be putting one on me and one on Obie, my friends' Boston terrier and Donist World CFO. You see, it's that special time of year when pumpkin flavored everything comes out for a "seasonal" two to three month span of taste sensation--don't get me started on the institutional evil known as the seasonal pumpkin surge and don't you worry your pretty little face, if the bills Obie drafted up pass through Congress pumpkin will be evergreen soon enough. Anyways, we have pumpkin soup, pumpkin waffle and pancake mix and the most holiest of holy, pumpkin beer (thank you Brutal Circle chum, Bill Yurkas for the tip to put cinnamon on the rim of a frosted pint glass...mind blowing!). Obie and I have brought in an '80s bomb shelter's worth of the orange boxed products and he's right now manning (dogging?) the forklift to load it into the Donist World storage unit and...DAMMIT! Obie! Who taught you to drive a forklift? Okay, I did, but I told you that lever is for reverse...REVERSE! <sigh> While I fill out the insurance paperwork, have a look at the comics that rocked our Donist World world.
Friday Slice of Heaven


Other Heavenly Items:
Mercury Lounge Beer School: Monk Brews - Oh my goodness gracious. This was my third beer school this year, so I think I'm about ready to head into my doctorate. Anyhow, beer school was presented by the ever-knowledgeable Zach Rosen on the monk brews. Here's the lineup:

We were also treated to $2.00 off a pint of our choice--I went with the Orval--although I should have probably passed. Overall a heck of a fun evening.
Slice Into the Woods
Well, It's Been Exactly a Year Ago Today... - ...that I went in for a hernia surgery and really drove home what was the worst year of my life. I wrote all of the gory details in late October of 2011 at the post here, if you are brave enough to read about my misfortune. Basically, 2011 was food poisonings, illnesses, a shoulder injury that recurred four times, and then September and October. Brrrrrrrr...I get chills just thinking about that shit. I'll write a follow-up possibly on the anniversary of the post, I hope you're not squeamish, if so, skip it.