Holy crud, I'm glad this damn week is over.  Lack of sleep, unnecessarily frustrating days at work and exhaustion have plagued each day and succeeded in putting me in the most surly of moods. "F-you Monday through Thursday, you jerk faces...F-you."

Then of course there were the disappointing election results with the Republicans taking the house as many Tea Baggers (Big Business appointees) took key positions throughout the States.  At least California had the sense to shoot down Texas Oil's prop 23.  If only the younger voters had actually got up off of their lazy asses and voted, then some of the bat-shittery could have been avoided.

Maybe it would have taken Christine O'Donnell being more forward in pursuing her anti-masturbation campaign to turn out the youth vote.  "C'mon kids, you like to bop the bologna?  How's about twiddlin' the bean?  Well, if you enjoy your freedom then put down the mouse and get out there and make a difference!  Christine O'Donnell wants to take away your god given right to a tug of war session with cyclops, so get off your laurels, take a break from watching the...what's that you're watching?  Damn, that's gross, but whatever floats your boat...I happen to like sexy trees, but whatever...take a break and vote.  Rock the Vote, rock out with your cocks out.  Defend your right to pud whack!"  A few more political morons with psychotic beliefs spread throughout the states could have made a difference in getting the kids out there, but too late now.  Hmmmmm...I wonder what's going on over at porntube?

The Walking Dead on AMC - Okay, as pissy and grumpy as I was this entire week, this new show from AMC, based on the hit comic book series from Robert Kirkman (now on issue number 78) was everything that I could have hoped for in a very faithful adaptation.  The cinematography was beautiful and retained several key visuals from the comic and the sparse musical score succeeded in maximizing the spine-tingling chills from this visually striking and emotionally charged show.
Briefly, Sheriff Rick Grimes after being shot in the line of duty awakens alone in a hospital...completely alone with the exception of the dead walking about what remains of the world he used to know.  It is up to Rick to piece together what has happened and to retain the hope of finding his wife and son, or at the very least another living human being.
The comic itself can be described as a zombie comic, but at its core it is actually a look at humanity and the will to survive with a zombie backdrop.  The Walking Dead is primarily about the characters and how they interact with each other and the world they currently live in; The TV show looks to stay faithful to Kirkman's work.
That said, I cannot wait for the second episode when the voice on the radio is revealed--one of my favorite characters in the series.  I already know that despite buying each episode through the Playstation Store for my PS3, I will be double-dipping when this show is eventually released on Blu-Ray.  Part of me is hoping that the writer of the TV Show, Frank Darabont, releases a Blu-Ray version of The Walking Dead in black and white, as was done with his film The Mist

.  Although TWC is great filmed in muted color, I am curious to see if black and white version would add extra creep-out factor to the show or not.  We'll see.
If you even remotely like this show, and have not read the comic series, go out and buy The Walking Dead Compendium

, which contains issues 1-48 of this intensely engaging series in one large volume.  Warning though, it, like the show, is not for the faint of heart.

Ed Brubaker week at the comic shop - For last weeks comics, three Ed Brubaker books were released:  Captain America #611, Incognito: Bad Influences #1 and Secret Avengers #6.  All three comics were, of course, great with Secret Avengers being the book that I enjoyed the most because of the introduction of Shang-Chi to the group and a brief appearance by a character brought back to the comic spotlight from my personal favorite The Immortal Iron Fist

; yup, I'm not saying who.  I really enjoyed the return of Brubaker to some of the coolest of the martial art characters.  Now, if only Iron Fist would show up...
Captain America saw Bucky's past as the Winter Soldier beginning to play out in the media and "the people" demanding to know answers; thanks Baron Zemo, you jackass.  I love how Brubaker brings modern problems into his books and tweaks them just enough, except when some tea baggers got their feathers ruffled a while back.  I could see FOX "News" covering the great Bucky Barnes Duping of America story to death.
Incognito: Bad Influences continues from where the first limited series left off.   Although I was not blown away by the first series, I still enjoyed it immensely and this book is still definitely worth picking up.  I need to reread the first series all at once and see if it hits me with a stronger one-two punch, but this book sees Zack Overkill now out of witness protection and working with the government.  Things don't seem all that different for poor ol' Zack.

Halloween Party last Saturday and the Cake of Horror - Went to a mellow yet fun halloween party dressed as Thundarr the Barbarian, or rather, Thundarr the Barbarian with eye problems.  I look pretty stupid, but that's the point. Once I get ahold of some pictures, I will post a couple.  The one picture I do have is of the cake that a friend brought that is not for the faint of heart...trust me.  My friend was dressed as a zombified grandmother, complete with blood running down her night dress and fake cigarettes, and she walked into the party saying, "Hey kids, I brought you a cake."  Here it is: 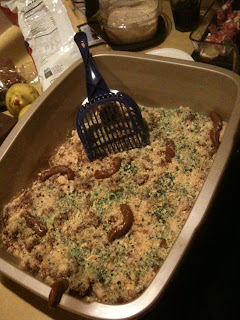 Okay, this thing looked so damn realistic that no one wanted to go near it, but after a few more drinks and a dare, people cut into it.  I was second in line and I have to say that it was pretty damn good.  Supposedly it was made from vanilla and chocolate cake, mixed with vanilla pudding.  On top vanilla wafers were crumbled up and some green dye sprinkled around.  The part I could not eat were the microwaved Tootsie Roll "poops" that I could just not bring myself to try.  Again fun party and with Army of Darkness

playing in the background a great time overall.
Yup, and here is Thundarr...I don't know why I have the doll head.


Slice Into the Woods

Banned Books - Okay, I'm a little late to the party on this one as Banned Book Week was over a month ago, but better late than never.  The banning of books and the attempted removal of materials deemed as "offensive" from libraries by certain groups throughout the United States is a delicate matter.  A dialogue needs to be opened with such groups so that they can adequately express their concerns regarding why books such as To Kill a Mockingbird, The Catcher In the Rye, His Dark Materials trilogy, The Perks of Being a Wallflower, Harry Potter, and hundreds more should be removed not just from school libraries, but public libraries.  It is important that everyones' concerns are considered when attempting to remove a book from an establishment because of language, references to sex, homosexuality, mentioning that homosexuality exists, mentioning that people might actually have sex, tolerance of any kind, mentioning drug use, expressing a belief other than the offended party's belief (political or religious), consumption of alcohol, etc.  Understanding is the key...
Yeah, just kidding...the best way to deal with the whack jobs attempting to infringe upon the rights of adults and someone else's child to choose what they want to read and to their right of free speech is to take a stance involving two words..."fuck"..."them"..."fuck them."  Simple.  If some insane snake handler takes it upon themselves to have a book removed from a library--usually, I suspect, a book they have never read--they are attempting to undermining my right to determine what is right for me.
Now, I'm not a fan of the Twilight books and for the life of me I don't understand why spooning a mopey vampire for what....1200 pages would be interesting, do I try to ensure that some kid cannot check it out from their school library?  No, I don't.  Why not, Donist?  Well, why would I?  I don't have the right.  It's not like the school library has the latest compilation of Letters to the Penthouse Forum: Children's Edition sitting on the shelves.
Twilight is a vampire book, bfd.  If a kid wants to read it, let them.  If your the parent of a kid and you don't want them to read The Catcher In the Rye because it says *gasp* a bad word, then use your parental right and monitor what your child reads even though your over-domineering ways will eventually push them to rebel against you.  If the book is part of a school curriculum, then there are usually other options available to appease your insanity over something you have never read.  Better yet, read the book beforehand and see what the book is about and why it is being taught.
On the otherhand, if you don't want me to check out His Dark Materials because of the mention of daemons, well, kindly go fuck yourself; I will read what I want.  This is a capitalist society, so vote with your dollars by not buying the book.  Heck, go spread the word to fellow closed minded individuals.  While you're at it, organize a book burning and make sure that the event is highly publicized...authors love that because book sales spike and the burned books were usually already paid for.
Enough ranting.  Moral of the story:  Don't be a douche and attempt to take away someone's freedom to read what they want, just because you disapprove.  In regard to your own children, exercise parenting at home for a change.  In regard to me, mind your own business...you don't see me trying to ban any of Glenn Beck's books now do you?