God this week dragged, but at least I cut into the fourth draft of my novel, which I am taking a hatchet to in a harsh way.  Down with the page count!  Also slowly finding an artist for my 5-page comic and working on designs for another blog, this time devoted to Tulip.  Also having multiple ideas for a teen book and about three comic mini-series that I really need to jot down before I forget them.  Burritos are calling, so let's cut right into things.

- For this Stephen King movie, I am referring only to the black and white version of the film, not the color.  The director had strongly wished for this film to be shown in black and white, but the studio refused to let the movie release unless it was in color, thus we get the director's vision on disk two and thank goodness.  Part psychological horror and part monster movie, the film deals not only with the creatures in the mysterious mist, but also the monsters of the human persuasion.  It reminded me of the early Twilight Zone episode "The Monsters Are Due On Maple Street," only in this film, the monsters are all too real.  Not for the feint of heart and very dark, and a word of advice...put the kids to bed for this one.  The scariest part of this film is when common folks begin listening to a completely mental Jesus-freak and act without conscious and out of fear...wait am I talking about the film or people listening to politicians and FOX news "personalities"?

The Stuff of Legend: The Jungle #1 - Written by Mike Raicht and Brian Smith with art by Charles Paul Wilson III.  Okay, dammit, this book must have come and gone from my comic shop and I had to order it online and subsequently wait for it to arrive; I am so glad that I did.  A while back I wrote about the trade paperback of The Stuff Of Legend

and had nothing but praise for this beautifully magical series.  Every child at some point wishes for their toys come to life, openly hoping to one day catch their toys in the act of movement.  But in this world of living toys, there also exists The Boogeyman, who abducts a child into the nightmare world of The Dark, leaving the boy's most loyal toys and his dog to set off on a journey to rescue him.  Each toy has its own distinct voice and motivations.  Love, loss, urgency, and treachery, this series has it all.  The second issue of four of "The Jungle" storyline releases within the month and this time I was sure to have The Stuff of Legend added to my pull list.  I believe that I read somewhere that this series will be comprised of three volumes, but I am not sure.  Here is to hoping that when this series ends--I secretly wish that it never will--that all of the issues are bound into a single hardcover presentation.  I cannot praise this book enough.  Now, where issue #2!!! 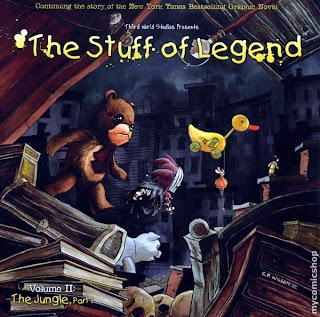 - Okay, this one is partially in jest, but to be honest I actually had fun watching this ridiculous train wreck of a movie.  I may actually write a "kick in the jimmy" review of this one in the next week or two, but when it comes down to it, the movie held my attention for 93% of the time.  Action, stuff done blowin' up good, ninja shit, children beating the snot out of each other, a hot brunette with glasses, a hot and brilliant red-head, and cool underwater ships, what the hell else could you ask for?  Well, perhaps a story with a better plot, better dialogue, and better acting, but when you also have The Baroness and Scarlet brawling in their ultra-hot outfits, you can't go wrong.  So what if the screenplay was written by a 10-year-old who licked way too much Purell Hand Sanitizer, at least they had enough sense to sexy the shit up.  Heck, they also melt the Eiffel Tower with nanites.  My biggest complaint is that they put Snake Eyes in a rubber suit with a mask that has a rubber mouth.  What the what, movie studio?  Fans know Snake Eyes wears cloth--it breathes better--and that the mouth is not carved into the damn mask.  Someone must have told the studio after the fact, thus you can't see Snake Eyes's psuedo-mouth on the cover of the DVD.  Nonsense aside, this was fun and I have to restate....brutal kid fight and hot girl fight!  Check it out.

Slice Into the Woods
Shadow, Golden Retriever and Menace of the Greenbelt - You know that nothing that annoying or horrible went down in the week, when the worst thing that you can complain about is a Golden Retriever named Shadow, who did not really do anything.  I have to break this one down.
Six months ago, Tulip was out playing on the greenbelt and this manic, yet lovable, Golden Retriever came down with his owner.  She said that Shadow had been in a car for the past six hours and that he was very hyper.  She released him from the leash and Tulip ran up to show the dog her frisbee, but Shadow was so spazzed out of his mind that he was like a whirling golden tornado of destruction.  Tulip, not knowing what to do, ran to a corner of the greenbelt and Shadow charged after her wanting to play, but accidentally bowled Tulip over in his over excitement, trampling her.  Tulip screamed and big, empty-headed Shadow believing that Tulip was playing, chased her back towards Amy and I, where a snarling and snapping Tulip sought refuge until we picked her up.
Cut to a few months later, and Shadow comes barreling down to the greenbelt physically dragging the owner's daughter behind him.  Tulip sees the dog, screams and runs to hide behind our legs, with Shadow flying at us.  More high-pitched snarling and snapping follow and the psychotically happy Shadow is dragged away, leaving one traumatized Boston Terrier behind.
This Wednesday, I came home on my lunch break to take Tulip out and to play ball with her, and what do we see?  Yup, the dreaded menace of Shadow at the top of the greenbelt stairs.  Tulip, who seconds earlier had been a tennis ball chasing streak of lightning, slowed her pace and cowered at my feet; the retriever was nowhere near us.  His owner lead him to the far ends of the greenbelt, but that was not far enough for Tulip, who was shaking.  So, we left.
Now, whenever we go out to play, she stays at my legs and will not chase the ball, frisbee or me.  All she wants to do is cower at my feet and frantically scan the horizon of the greenbelt for her most feared enemy, Shadow, the nutsy hound from Hades.  Damn crazy dog.

Labels: Friday Slice of Heaven, Slice Into the Woods